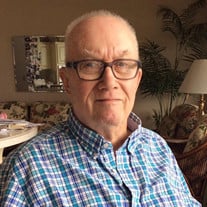 We lost our beloved George W. Miles on June 3, 2017. Everyone who ever met him liked him. He was easy going, casual and most of all loving. If someone cut him off in traffic, he would often say, "bless you" & mean it. Everyone in town often saw him riding his 'flagged' recumbent bike. He rode to Starbucks to visit with friends & on nice days you could find him stopping at Michael's Bistro for a break just to watch traffic on his way to Harvest Foods. He was born in Britton, SD on May 26, 1941. He grew up attending elementary and high school in Britton, SD. One Monday morning when he was 14 his father, gave him a pair of gloves & announced he would begin working summers on the family farm northeast of Britton. He & his friends picked rocks, put up hay stacks & formed muscles & a good work ethic. He graduated high school in 1959 and attended a year of college at State University in Brookings. He then worked in Denver at the Martin Co. for a short time where he saw the Titan Rocket being built. Upon returning to SD, he began working at Thorp Auto, his father's company, as a salesman until he enrolled in Augustana college midterm. He attended Augustana for a year and a half; then joined the Air Force in 1963 and served stateside during the Vietnam war. George met his wife, Kathleen Atkinson in June of 1964 while on leave after basic training. They were married the following year on February 6, 1965. Their honeymoon was the trip from SD to Larson AFB in Moses Lake, WA. Their first home was a singlewide 35ft trailer home at Irish Meadow Trailer park on Broadway, Moses Lake. As Larson AFB began to close in 1966, its name changed to Grant County Airport. George's last job there was moving hoses from yard to yard, trying to keep each yard's grass green as the whole base changed hands. He was next transferred to Beale AFB in Northern California where the super secret reconnaissance SR-71 was based. He and his wife often enjoyed seeing the 'blackbird' in the sky and hearing its engines rev as they ate their lunch in their car near the runway. Upon discharge from the Air Force after 4 years, he returned to Britton, SD and worked again as a car salesman and then as shop foreman at Thorp Auto. In 1972 George transitioned to working at the family farm. He continued there until 1988 when he moved his family to Moses Lake, WA. He started Hidden Treasures, a sports card shop; later worked for Pony Express; sold consignment on eBay and lastly enjoyed an early retirement. He volunteered as a driver for many years for the American Legion, taking the older Vets to the hospital in Spokane. He enjoyed the war stories these old men would tell. They all enjoyed the trip. He loved people and had friends everywhere. He belonged to the First Presbyterian Church, the Britton chapter of the Masonic Lodge, and the American legion. He had been a Shriner for many years, enjoying donating his time selling popcorn at the Shrine Circus in Aberdeen, SD. For a time he was an active participant in Kiwanis in Moses Lake. Left in sorrow to miss her beloved is his wife of 52 years, Kathleen. George was a devoted father to son , Aaron of Spokane, WA , & daughter Gretchen of San Marcos, CA. He was tremendously loved by his Grandchildren Scot T. Wade 17, San Marcos, CA and Granddaughter Midori Mae Miles 6 of Spokane, WA He is also survived by his loving sister Jeani (Jeff) Amacher of Britton, SD, brothers-in-law Harold (Sharon) Atkinson of Simpsonville, SC, Ronnie Roehr of Britton, SD and sisters-in-law Bonnie (Clayton) Gerken of Britton, SD Jane (Dennis)Bush of Tulsa, OK and a host of nieces and nephews. He was preceded in death by an infant son in 1969, his mother Bonnie Miles in 2002 and father Jim Miles in 2009. We will miss his lighthearted sense of humor and will forever miss, but remember his steadfast love. A memorial service will be held at 3 p.m., Friday, June 9, 2017 at Kayser's Chapel & Crematory. Please sign the online guestbook or leave a note for the family at www.kayserschapel.com Arrangements are in care of Kayser's Chapel & Crematory.

We lost our beloved George W. Miles on June 3, 2017. Everyone who ever met him liked him. He was easy going, casual and most of all loving. If someone cut him off in traffic, he would often say, "bless you" & mean it. Everyone in town often... View Obituary & Service Information

The family of George Miles created this Life Tributes page to make it easy to share your memories.