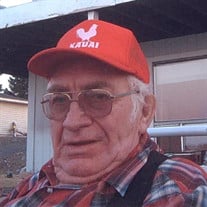 William P. Schell, 82, went to be with the Lord on October 1st, 2017. William was born on February 20,1935 to William and Katherine Schell in Boulder, Colorado. William married Elsie Johnson on January 5,1957 in Ratone, New Mexico. Together they raised 5 children while farming in Longmont, Colorado, until 1964 when they moved their family to Moses Lake, Washington to continue farming. William then went on to work for Grant County Tractor and later drove semi for Nestle-Carnation for 35 years until he retired. After retiring William and his wife Elsie both drove for People to People until 2008. William enjoyed hunting and fishing, taking many trips to the ocean to go salmon fishing, taking their grandchildren along. William was a member of the Moses Lake Gun Club and loved to trap shoot. William also spent many years building and flying RC airplanes. William was a big Mariner and Seahawk fan and always knew when they were playing so he never missed a game on TV. William enjoyed traveling and took many trips with his wife, whether it be to a casino in Winnemucca or traveling to Florida to go to Walt Disney World, along with a cruise to the Bahamas. William loved spending time with his family, his grandchildren and great grandchildren, and loved them all dearly, telling them stories and giving them his wisdom and teaching them about life. William is survived by his children Gene Johnson (Kathy) of Davenport, Washington, Ronald Johnson (Laura) of Overland Park, Kansas, Karen Short (Earl) of Moses Lake, Washington, Deanna Prentice of Moses Lake, Washington, Gayle Hopkins (Mark) of Moses Lake, Washington. One sister Linda Edwards (Clyde) of Provo, Utah. William had 15 grandchildren, 29 great grandchildren and 8 great-great grandchildren. Along with his parents William was preceded in death by his wife Elsie of 59 years, and a son-in-law Russell Prentice. Memorial services will be at Our Lady of Fatima Catholic Church at 200 N Dale Road in Moses Lake, Washington on Tuesday, October 10th at 2pm. There will be a gathering afterwards.

William P. Schell, 82, went to be with the Lord on October 1st, 2017. William was born on February 20,1935 to William and Katherine Schell in Boulder, Colorado. William married Elsie Johnson on January 5,1957 in Ratone, New Mexico. Together... View Obituary & Service Information

The family of William Peter Schell created this Life Tributes page to make it easy to share your memories.