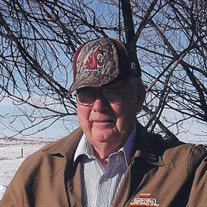 William “Bill” Larry McLean left us very suddenly on April 28, 2019. Bill was born September 28, 1941 in Wenatchee, Washington to William “Harold” and Winifred McLean. Bill attended Mold School from 1st – 3rd grade. When the school closed, he transferred to the Coulee City School District, where he graduated in 1959. After graduation Bill attended WSU, where he was on the Collegiate Judging Team. While at WSU, he lived and worked in the beef barn, gaining insight and training in the beef industry from Mr. Bill Bennett. Bill always said that studying under Mr. Bennett was what ignited his passion for cattle. He graduated in 1964 with a degree in Animal Science. While at WSU, Bill met and married the love of his life, Beverly Irwin. They were married for 57 years. Following graduation, they returned to the family ranch. They raised two children there, Dean McLean and Deanna Rice. Bill always liked to tell people that he lived in the same house his entire life. Bill got his start in the cattle business raising Shorthorn Cattle. After many years he decided Angus Cattle were the way to go. He purchased a small herd of Angus which grew and gained him a strong reputation in the Angus industry. Bill judged regional, national, and international cattle shows, as well as many fairs. He was an active member of the Washington State Angus Association and the American Angus Association. Bill was also a member of the Washington State Cattleman’s Association. Up until his passing, he served on the National Cattleman’s Beef Board and was an advisor to the Washington State Beef Commission. He spent many hours working to promote the beef cattle industry. Bill loved meeting new people. He never met a stranger and would gladly share his knowledge, experience, and opinions with anyone. As a passionate cattleman, he was more than happy to provide tips to people purchasing beef at meat counters. Bill was a loving husband, father, grandfather and great- grandfather. He delighted in playing with his great grandchildren. Bill is survived by his wife Beverly, daughter Deanna Rice (Wayne), daughter-in-law Linda McLean, grandchildren Lee McLean (Vanessa), Cheyenne Rocha (Jose), Sam Rice (Akaycia), Emily Rice, great grandchildren Henry McLean, Landry Rocha, and sister-in-law Kathy Pierce (Sam). He was preceded in death by his son Dean McLean, his parents Harold and Winnie McLean, and his mother and father-in-law, Robert and Lena Irwin. Please join us for a celebration of Bill’s life on May 17th at 1:00 P.M. at the Coulee City Assembly of God Church.

The family of William Larry McLean created this Life Tributes page to make it easy to share your memories.