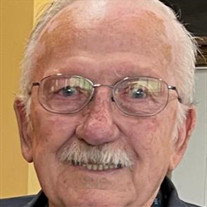 William “Bill” Huff, 86, our loving and kind father, grandfather, great grandfather, and brother, passed away June 9, 2022, in Spokane, Washington surrounded by his children. Bill was born in Rupert, Idaho on October 27, 1935, to Henry and Bertha Huff. He was the 4th of four children. He attended schools in Minidoka County, Idaho, graduating high school there. Bill worked on the family farm, and after graduating, joined the Marines, serving during the Korean war. Bill was a skilled Fabricator, ironworker and could fix most anything. He truly was a “jack of all trades”. After coming home from the military, he met the love of his life, Karen Roland, and they were married in 1956 in Burley, Idaho. They were blessed with four children, Jeff, Dan, Angie and Bryan. Bill and Karen began their married life in the Rupert area, moving to Washington State for a time, then back to Rupert. They eventually settled in Moses Lake, Washington. Bill enjoyed spending time with his family, playing pinochle, and water skiing or riding jet skis on Moses Lake. He also enjoyed going for morning coffee and seeing the girls at Café D Espresso. He loved visiting his children at their homes in Washington, Arizona, and Idaho. One special memory was his daughter and son-in-law taking him to Spring training in Arizona to watch the Mariners practice, with his wife Karen, a lifelong fan. Bill enjoyed watching sports, especially if his sons or daughter were playing. Later in life, he enjoyed watching his grandchildren and great-grandchildren participate in activities/sports. He had a great love for our Savior, Jesus Christ, and attended Moses Lake Christian Church. Bill is survived by his children: Jeff Huff, Moses Lake, Washington; Dan (Kim Sheide) Huff, Idaho Falls, Idaho; Angie (Kevin) Quinn, Puyallup Washington; Bryan (Trish Boyle) Huff, Queen Creek, Arizona. Five Grandchildren: Courtney (Dustin) Conder, Puyallup, Washington; Casee (Justin) White, Puyallup, Washington; Corey (Jamie Gardipe) Clark, Marshall, Washington; Jordan (Lindsey) Huff, Roy, Utah; and Kelsey (Dylan) Pierce, Meridian, Idaho. Six Great Grandchildren: Keagan, Tavien and Callan Conder, Harrison and Heath White, and his only great granddaughter Tate Pierce. Bill is also survived by his sister that he adored, Dorothy DalSoglio, Sandy, Utah. He was preceded in death by his loving wife, Karen; his parents; and brothers Russell and Stanley. Memorial services will be held on September 17, 2022, 11:00 am at Kayser’s Chapel of Memories, Moses Lake, Washington. Interment will be at Guarding Angels Cemetery in Moses Lake, Washington, next to his sweetheart. The family wishes to thank the staff at St Luke’s Rehabilitation in Spokane as well as the Hospice House of Spokane for the care of our father during this difficult time.

The family of William Huff created this Life Tributes page to make it easy to share your memories.