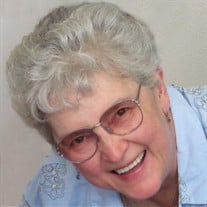 Willa Lou Bruketta, 78, Moses Lake resident passed away Tuesday, November 21, 2017 at Columbia Crest Care Center. Willa was born in Ellensburg, Washington on September 30, 1939, daughter of the late Louis and Wilma (Martin) Bruketta. She was raised and educated in Thorpe and Ellensburg. She obtained her degree and special training to become an x-ray technician. Over her career, she worked at Sacred Heart Hospital in Spokane, Samaritan Hospital in Moses Lake, and in 1988, she returned to Ellensburg and worked at Kittitas Valley Hospital until her retirement in 1998. She lived in Ellensburg following her retirement, until returning to Moses Lake following her recent heart surgery to be closer to her daughter and son-in-law. She loved to go on cruises and did a lot of traveling, which included visiting Australia, New Zealand, Fiji, Alaska, Hawaii, Nashville, as well as seeing the Kentucky Derby one year. Survivors include her daughter and son-in-law, Tammy and Randy Johnson; brothers and sisters, Gaylord Bruketta, Margaret Campbell, Barbara and Dave Rupert, Joellen Stradley, Bill Bruketta and Tony and Cindy Bruketta, as well as several nieces and nephews, who all loved and will greatly miss their “Aunt LouLou”. Holy Rosary will be prayed at 6:30 p.m., Wednesday,December 6th at St. Andrews Catholic Church, 401 S. Willow Street, Ellensburg, Washington. Mass of Christian Burial will be held at 11 a.m., Thursday, December 7th at St. Andrews Catholic Church.

The family of Willa Lou Bruketta created this Life Tributes page to make it easy to share your memories.