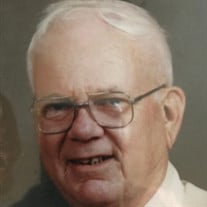 Wilber Brotherton III was born June 13, 1917 in Ann Arbor, Michigan and died in Moses Lake, Washington on August 7, 2019. He was preceded in death by siblings Harley, Rowena and Dorothy, wife Ivy Scott Brotherton and son Scott Nelson Brotherton. Wilber is survived by his children Wilber (Kris), Jerome (Sharon), and Mary Lou Brotherton all of Moses Lake and Richard Sonny Brotherton of Orland, California. He has eight grandchildren, six great-grandchildren, and several nieces and nephews. Wilber spent most of his working life focused on Brotherton Seed Company, along with his brother Harley who was head of research, and Bob Case of Ellensburg, who was in charge of sales. In the early nineties he handed over the running of the company to his youngest son, Jerome. Wilber and his brother Harley continued to go to the office to pick up the mail on a paid daily basis. They were the highest paid mailmen in Eastern Washington! He was a hard core family man, but found time to hunt and fish all over North America. Perhaps his biggest high was flying, mostly in his now vintage Navion for business, pleasure and with the Civil Air Patrol. Combining modesty, decorum, and self-assurance, he was liked and respected by all who knew him. His old fashioned values were reflected in the way he conducted himself as a true gentleman. He died peacefully in his sleep at home. The family is grateful to his compassionate caregivers, Kat, Kelsey, Janice and Mary who made this possible. A private memorial service will be held at a later time.

The family of Wilber E Brotherton created this Life Tributes page to make it easy to share your memories.