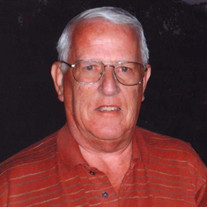 Wesley Allen Kisler passed away on April 23, 2018, in Othello, WA. Wes was born on August 17, 1937,in Ritzville, WA, to Clarence and Erna Kisler. He grew up in Warden, WA with his wheat farming family and graduated from Warden High School in 1955. He also attended Washington State University. After enlisting in the United States Air Force, Wes was stationed for four years at Mountain Home Air Force Base in Idaho. He was honorably discharged at the rank of Airman Second Class. Upon his return to the Columbia Basin, he worked on the Titan I Missile project and for Boeing in Moses Lake, WA. For the next three decades, Wes worked as a manager at International Harvester dealerships in Othello, Moses Lake, and Lind, WA as well as Moscow, ID. He retired in 2000. Wes married Sandra Wanamaker on August 6, 1961, in Wallace, ID. With their three children, they moved to Othello in 1967 where they lived for almost 51 years. After Sandy retired in 2001 Wes and Sandy divided their time between their home in Othello and their condominium in the Palm Springs, CA area; always seeking out warmer climates to play golf and spend time with their family. Wes is survived by his wife Sandy of Othello, WA; daughter Kari Kisler of Warsaw, Poland; sons Dean (Karen) Kisler of Bothell, WA; and Bryce (Debbie) Kisler of Everett, WA; granddaughters Katherine and Elizabeth Kisler of Bothell, WA; sister Sylvia (Rod) Butler of Spokane, WA; brothers Dennis Kisler of Houston, TX; and Darrel (Patty) Kisler of Warden, WA; and sister-in-law Loretta Kisler. He was preceded in death by his parents and his brother, Howard Kisler. Our family would like to extend our gratitude to Loura and Lupe Ayala and their family for the loving care they provided Wes during the last few years. Their tremendous heart felt support was great comfort for him and the family and allowed him to enjoy his final years at home with his loving wife Sandy. A funeral service will be held on Saturday, April 28, 2018, Warden Community Church at 11:00 a.m. In lieu of flowers, the family suggests donations to Warden Community Church, the Michael J Fox Foundation for Parkinson’s Research, or Fisher Center for Alzheimer’s Research Foundation. Please sign the online guestbook or leave a note for the family at www.kayserschapel.com Arrangements are in care of Kayser's Chapel & Crematory.

Wesley Allen Kisler passed away on April 23, 2018, in Othello, WA. Wes was born on August 17, 1937,in Ritzville, WA, to Clarence and Erna Kisler. He grew up in Warden, WA with his wheat farming family and graduated from Warden High School... View Obituary & Service Information

The family of Wesley A Kisler created this Life Tributes page to make it easy to share your memories.