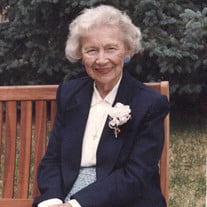 Vivian Lucille (Stoneman) McPartland, 96, long time resident of Warden and Moses Lake, passed away Wednesday, April 4, 2018, at Summerwood Care Center, in Moses Lake. Holy Rosary will be prayed at 1:30 pm on Friday, April 13th, at Queen of All Saints Church in Warden, followed by Mass of Christian Burial at 2:00 pm. Interment will be at Sunset Memorial Gardens. Vivian was born June 16, 1921 to the late Alba Mason “Pat” Stoneman and Edna Idell (Del) McCann Stoneman in Seattle, Washington. Vivian’s family later moved to Bremerton and lived on Kitsap Lake where for a time she attended a one room schoolhouse and later graduated from Bremerton High School in Bremerton. She went on to attend Linfield College for one year before having to leave due to illness in the Spring. She was a member of Sigma Sorority there. One good thing that came from that college time was meeting her husband Neilan on a blind date. They were married on October 6, 1941. Vivian and Neilan moved to the tiny town of Richland (Eagle Valley) Oregon after Neilan’s service in WWII and farmed the family dairy farm. There they had three children Jacqueline Kay, James Patrick and Michael Scott. Opportunity called them to the Columbia Basin where they farmed just north of Warden and added three more to their brood – Terry Alan, Kevin Leigh and Shelley Ann. Vivian loved gardening, golf, bridge, travel - with many trips to Europe, Ireland, and Mexico- reading, music, art, and absolutely any animal she came across. She was a wordsmith and she loved nothing better than a good play on words. She had friends of all ages and continued to collect new ones and kept the old all of her life.But, Vivian’s greatest joy was the time she spent with her children, grandchildren and great grandchildren. She was a member of the Sage Hills Golf Club and the Moses Lake Golf and Country Club, Queen of All Saints and Our Lady of Fatima Catholic Church and served and worked at Birth Right. Vivian is survived by her 4 sons, Pat (Maureen) McPartland, Mike (Carol ) McPartland, all of Warden. Terry (LuAnne) McPartland of Salt Lake City, Utah, Kevin (Thu) McPartland of Vietnam and two daughters Jackie McPartland of North Bend, Oregon and Shelley (Curtis) Covington of Woodinville, Washington. One sister, Gerry Enger of North Bend, Washington, 25 grandchildren and spouses, 23 great grandchildren and numerous nieces and nephews. Besides her parents – she was preceded in death by her husband Neilan, 1 brother Alton Roy and numerous beloved in-laws and family who went before to prepare to welcome her home. The family would like to thank the wonderful care given by Summerwood and the staff who lovingly cared for Mom these past 4 ½ years and up to her very last moments there. Please sign online guestbook or share a memory with family at www.kayserschapel.com Arrangements are in care of Kayser’s Chapel of Memories, Moses Lake.

The family of Vivian L McPartland created this Life Tributes page to make it easy to share your memories.