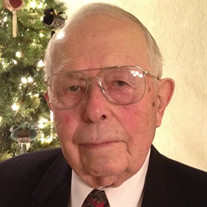 Victor Rupert Franz, age 96 of Moses Lake, Washington, surrounded by his family, departed this life to be at home with the Lord, January 17, 2017 at the Columbia Basin Hospital Long Term Care Unit in Ephrata. He was born June 29, 1920 in Adams County near Schrag, Washington at the family home to Peter L. and Agnetha (Ewert) Franz. Vic attended grade school at the Schrag School and graduated from Lind High School in 1938. Vic married Phyllis Anne Tucker February 16, 1951. They were married 58 years before his beloved Phyllis passed away in 2009. Vic started farming right out of high school. Vic always had an innate curiosity about the world around him. He began deep well irrigation in 1968 on a portion of the farm. Vic also ran a cow-calf operation for many years. He was involved with the development and manufacture of the FRANZ shovel, which was designed for deep seeding dryland winter wheat. After turning the farm over to their sons, Vic and Phyl retired to Moses Lake in 1985. Vic loved flying. He owned many different airplanes over the years, and was known as a skilled pilot, especially after having a propeller hub fail, tearing the motor from the plane, but still being able to land unscathed. Vic and Phyl always had a special place in their hearts for all the good friends they made over the years being involved with International Flying Farmers as well as the Washington Chapter of IFF. They took many trips all across the US and Canada, and to Mexico and Central America. Vic was a member of Menno Mennonite Church, International Flying Farmers, serving as President 1984-85, The Lind Grange Supply Board of Directors, Washington Association of Wheat Growers, and Farm Bureau. He also served as an Adams County Fire Commissioner. Vic is survived by his son, Randy Franz, wife Barb, their daughters Amber Slate, Michelle Rogers and husband Raimond; daughter Pam Bowman, her daughter Renea, significant other Ian MacDonnell, and their son Gabe; son Curt Franz, significant other Ruth Dasch, his son Pete Franz, wife Tessa, and their sons Ayden and Ethan, and Curt’s daughter Anna Franz. Preceding him in death were his wife Phyllis, his parents, his brothers Walter, Albert, and Arnold, and sisters Bertha and Sylvia. A Memorial Service will be held Saturday, March 4, 2017: Internment at 10 am, Service at 11 am at the Menno Mennonite Church, Ritzville, Washington, with a fellowship meal after. Kayser’s Chapel of Memories, Moses Lake, is in charge of the arrangements. Gifts in remembrance of Vic may be sent to Mennonite Country Auction, PO Drawer E, Moses Lake, WA 98837, or to the International Flying Farmers Memorial Scholarship Fund, c/o Don Leis, 5315 Horatio Harris Creek Rd, Greenville, OH 45331-9332. “I have fought the good fight, I have finished the race, I have kept the faith.” 2 Timothy 4:7 (NRSV)

Victor Rupert Franz, age 96 of Moses Lake, Washington, surrounded by his family, departed this life to be at home with the Lord, January 17, 2017 at the Columbia Basin Hospital Long Term Care Unit in Ephrata. He was born June 29, 1920 in Adams... View Obituary & Service Information

The family of Victor R. Franz created this Life Tributes page to make it easy to share your memories.