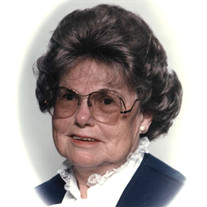 Verna Hansen Duvall, 99, long time Moses Lake resident, passed away December 26, 2018. Funeral services will be held Friday, January 4, 2019, at 10:00 a.m. at the Church of Jesus Christ of Latter-Day Saints Stake Center on 1515 S. Division. Interment will follow at Pioneer Memorial Gardens. Verna was born in McCammon, Idaho on November 20, 1919, to the parents of Reuben and Lauretta Hansen. She was the third of five daughters. At the age of three, the family moved to Hyrum, Utah. Verna graduated from Cache Valley High School in 1938. After high school, she went to the LDS Business School. In 1940 Verna was called on a mission to the Western States Mission in Omaha, Nebraska. After her mission, she went to work at Welfare Square as a secretary.During her time at Welfare Square, Verna met Alva Duvall. Prior to their marriage, World War II began; Alva served in the Navy during the war for 27 months, and Verna wrote him every day. One week after the Navy discharged him, Alva and Verna were married in the Salt Lake Temple on February 7, 1946. Alva and Verna lived in Salt Lake City for seven years where their first two children, Scott and Dawn were born. In 1954, Alva and Verna moved to Vernal where their third child, Kay, was born. Because of lack of irrigation water, Alva and Verna moved to Moses Lake, Washington in 1955 where their last child, Craig was born.They settled out in Block 40 and began to farm. Verna has been faithful in the Church of Jesus Christ of Latter-Day Saints her whole life. She served in various church callings throughout her life, including as Relief Society president for seven years within the Moses Lake Third Ward and is currently a member of the Moses Lake 11th Ward. In 1981, Alva and Verna served a one-year mission for the Church in the Atlanta Georgia Mission. Verna was preceded in death by her husband, Alva, in 1991, and is survived by one sister, Ivean Griffiths, her four children, Scott (Jayne) Duvall, Dawn (Dan) Martin, Kay Duvall, Craig (Kathleen) Duvall, 12 grandchildren, and 28 great grandchildren.

The family of Verna Duvall created this Life Tributes page to make it easy to share your memories.