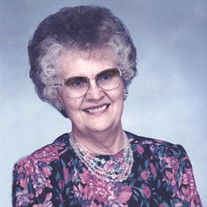 Our mother, wife, grandmother, great grandmother, and aunt returned home to our Heavenly Father Sunday March 4th, 2018. She was born June 13, 1928 in Burton, ID to Zina Opal and William Barber Clark. She attended elementary school in Independence, ID, Madison High School, and Ricks College in Rexburg, ID. She mastered many homemaking arts and learned to work hard along side her father and brothers in the fields, milking a cow, and riding a horse. She married Clarence Lennis Hope on March 12, 1947 in the LDS Idaho Falls, Idaho Temple. They raised six children in Darlington, ID-Lost River Valley- where Lennis worked for certified seed potato companies. He was transferred to Moses Lake, WA in 1978 with Carnation Potato Company where their two youngest children finished high school. She worked in both the Mackay, ID and Moses Lake, WA School Districts. She was an active member of the Church of Jesus Christ of Latter-day Saints and served in many ward and stake leadership positions. She and Lennis served an LDS mission in the England Bristol Mission from 1991-1993 after they retired. They also enjoyed serving in the Seattle and Columbia River Temples. She was preceded in death by her parents, older brothers Allan Clark, his wife Eva, Blain Clark, Ben Clark, and younger sister Lela McCulloch. She is survived by her husband Lennis and their six children, Martha Hicks(Larry) Etna, CA; Margie Waters(Curtis) St. Johns, AZ; Blain Hope(Sarah) Jerome, ID; Melode Palmer (Brad) Moses Lake, WA; Marilyn Reed(Chad) Manila, UT; and Daniel Hope(Holly) Rigby, ID; 27 grandkids, 37 great grandkids with three on the way. She is also survived by her younger brother Jay Clark and his wife Reah, a sister-in-law Betty Clark, a brother-in-law Kenneth McCulloch, and many nieces and nephews. Services will be held Sat. March 17 at the Grape Drive LDS church in Moses Lake, WA with viewing at 9:00, Funeral at 10:00 am. A graveside service will be held at the Annis Little Butte Cemetary in Menan/Annis, ID, Mon. March 19 at 11:00 am. Loving and serving her family was her passion! She will be extremely missed!!

The family of Verla J Hope created this Life Tributes page to make it easy to share your memories.