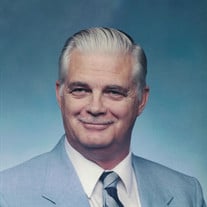 Verl Scott Mathews, 83, of Moses Lake, Washington, passed away on Wednesday, February 12, 2020, at Central Washington Hospital surrounded by his loving family. He fought a long hard battle with End Stage Kidney Disease, but his body could no longer continue the fight even if he was determined to. Verl was born on March 28, 1936, in Bangor, Michigan, to Leo and Nettie (King) Mathews. In his youth he, along with his brothers Leon and Ivan, loved playing pranks on family and friends. After joining the United States Air Force at 16, assuming his older brother's name, he went on to serve 20 years with honor and integrity, eventually earning him the rank of SSGT. While stationed at Paine Air Force Base near Everett, WA, he met and married the love of his life, Norma June. They were married April 16, 1955, and together they raised 6 children. After converting to LDS, on November 17, 1984, Verl and Norma were married for eternity in the St. George Temple in St. George, Utah. After serving his country, Verl moved his family to Las Vegas, Nevada in 1973 where he went to work for Clark County Juvenile Court in charge of the kitchen at Spring Mountain Youth Camp where he retired after 28 years. After his retirement he loved to travel to see family and to help his fellow church members by involving himself with his beloved Church of Jesus Christ of Latter-day Saints. Verl is survived by his sons Robert (Jan) Willits of Idaho; James (Connie) Mathews of Las Vegas, Nevada; Scott (Barbara) Mathews of Fallon, Nevada; David (Patty) of Marysville, Washington; Terry (Kelly) Mathews of Coeurd'alene, Idaho; and his daughter Diane Thoene; grandsons Benjamin Mathews of Fallon, Nevada; Colton Reeder of Moses Lake, Washington; Ryan Thoene of Moses Lake, Washington; granddaughters Currin (Ryan) Ross of Lake Stevens, Washington; Angela Stackhouse of Chase City, Virginia; Alicia Mathews of Las Vegas, Nevada; Aundrea Mathews of Las Vegas, Nevada; Danielle Mathews of Coeurd'alene, Idaho; and numerous great grandchildren. Verl is preceded in death by his loving wife Norma, his parents Leo and Nettie Mathews, brothers Leon and Ivan, sisters Velma and Sharon. Funeral arrangements are being handled by Kayser's Funeral Home. Viewing is on Thursday, February 20, 2020, at 12:00pm at The Church of Jesus Christ of Latter-day Saints 1849 Nelson Road NE Moses Lake, Washington. Funeral service will be directly following viewing at 1:00pm. A reception will follow the service at the same location. Interrment to be at Cypress Lawn Memorial in Everett, Washington, on Friday, February 21, 2020. A special Thank You to the staff at Fresenius Medical Center, where our Dad went for his Dialysis treatments. Also would like to recognize Dr. Mabel Bodell and Jan Vetter, PA-C, for their outstanding care of our Dad.

Verl Scott Mathews, 83, of Moses Lake, Washington, passed away on Wednesday, February 12, 2020, at Central Washington Hospital surrounded by his loving family. He fought a long hard battle with End Stage Kidney Disease, but his body could no... View Obituary & Service Information

The family of Verl Scott Mathews created this Life Tributes page to make it easy to share your memories.