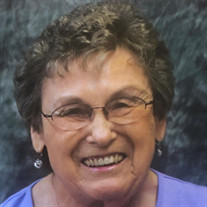 Vera Sperr went to be with her Lord and Savior on October 9th, 2020. VeraMae Mary Ann Fischer was born January 20, 1932 to Harry and Bertha Fischer in Holloway, Minnesota. She and her husband Clinton G. Sperr met at Grandma Sperr’s Easter dinner in1950. They were engaged a year later and married on March 15, 1952 at St. John’s Lutheran Church in Holloway, Minnesota. Clint and Vera celebrated their 68th wedding anniversary this year. In December of ‘52 Clint was stationed at Camp Gordon waiting for his orders to Korea. Vera, pregnant and wanting to be closer to family moved in with her sister Vera in Elk River Minnesota. 1953 their most awesome son Alan Mark Sperr was born and shortly after his birth Vera and Clint were on the move again to Minneapolis where Clint was enrolled in electronic school On February 6, 1955 Cathleen Mae was born. Vera and Clint moved often with Clint’s job at IBM during these times two more children were born, Paulette Jean on October 28, 1956 in Syracuse, NY and while on a Thanksgiving trip, Tamara Sue was born November 28, 1960 in Minneapolis. Vera who became a licensed hairdresser in 1950 never stopped learning new styles and perfected her trade at many beauty shops, Cora’s and Katy’s to name a few. Her love for the trade led her to become a instructor and was a favorite to many of her students. Her last hairdressing job was at Brookdale Hearthstone Assisted Living where she loved doing the elder’s hair and chatting with them. Vera had a love for cooking and baking; her dishes were loved by all. Sewing was another passion of Vera’s and she also enjoyed playing cards, dancing and going to potlucks anywhere, anytime. Her favorite pastime was talking on the phone with her children, her sisters, extended family and with the numerous friends she made throughout their travels. Vera was also an accomplished fisher-woman, her and Clint could be seen out on the lake in their boat where she would out fish him. They were snowbirds and went to Mesa, Arizona every winter where they made many life-long friends. We will remember our Mom for her great strength and faith in God. Everyone who knew Vera will remember her for her caring, compassionate nature and her sense of humor. She was the family planner and always coordinated family celebrations where she remembered what everyone loved to eat and was sure to make their favorite dish. She is proceeded in death by her parents, Harry and Bertha Fischer, her sisters Doris, Vera, Bernice, Sadie, her brother LeRoy and her son Alan. She is survived by her loving husband Clint and three daughters, Cathleen (Pete), Paulette (Bob) and Tamara (Briant) and her grandchildren Michael Sperr, Doug Ward and Spencer Bailey. Our family would like to extend a heartfelt thank you to her close neighbors, friends and Pastor Walter Klockers for their support and kindness throughout her life at Moses Lake. We would also like to thank the Doctors, Nurses, Techs and Aides at Lake Ridge Center as well as Samaritan Hospital for the love, care and concern they gave to Vera over the last few months of her life. A service and memorial is planned at Immanuel Lutheran Church in Moses Lake on Wednesday, October 14, 2020.

Vera Sperr went to be with her Lord and Savior on October 9th, 2020. VeraMae Mary Ann Fischer was born January 20, 1932 to Harry and Bertha Fischer in Holloway, Minnesota. She and her husband Clinton G. Sperr met at Grandma Sperr&#8217;s Easter... View Obituary & Service Information

The family of Vera Sperr created this Life Tributes page to make it easy to share your memories.

Vera Sperr went to be with her Lord and Savior on October 9th,...