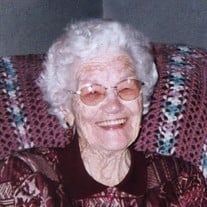 Vera Johnson, 108, a resident of Moses Lake and formerly of Almira passed away on May 13, 2017 at Columbia Crest Care Center. Vera has been and will be forever a lady of the Eastern Washington dry land wheat country. Born in her parents homestead farm home March 9, 1909 attended by a local pharmacist. Vera’s parents Jason Thurston and Florence Jessie Thrall homesteaded north of Marlin. Vera was the oldest of sisters Wilma and Edna and brother RD Thrall who all preceded her in passing. Her immediate family includes daughters Norma Yvonne Venema, Joy Louise Browder, and Vivian Marjorie McClung. Her family includes seven grand children, fifteeen great grand children, and two great-great grand children. Vera attended Marlin grade school and graduated from Marlin High School in 1926. Vera attended Cheney Normal (Now Eastern Washington University) graduating in 1928 with a two year teaching degree. She attended Ellensburg Normal and earned a lifetime Washington teaching certificate. While in college she and a friend walked the 26 miles from Cheney to Spokane. They did get a ride back to Cheney. With friends, she traveled by car and camping along the way to the Chicago Worlds Fair. Vera taught first and second grade in several Eastern Washington country schools including Keller, Marlin, Grand Coulee and Wheeler. She often had as many as forty children in combined classes.Vera was a good match for her pupils. Being the oldest child in her family and girl of the prairie she cared for her younger brother and sisters, helped with farm chores and harvest and was an avid horse back rider. One summer Vera worked for her future sister-in-law Esther Tolonen during harvest. There she met Emil Johnson who farmed his parents place a mile to the north. They were married in 1935. Vera was 26 and Emil was 35 and both considered somewhat older newlyweds in those days. They were well equipped and matched in experience for life as Eastern Washington dryland wheat ranchers. Emil worked and managed the farm, cared for the livestock and repaired the farm equipment. As a rancher’s wife and partner Vera kept the house, raised three daughters, and tended a large garden. During Harvest she milked the cows and cooked meals for the large crew. She kept a large flock of chickens, selling and exchanging cream and eggs for groceries. Every year Vera raised 100 fryers for the family freezer. Her whole wheat bread was a family mainstay and treat. And, she did all this in her quiet competent way. Vera is a lifetime member of the Washington State Grange joining at age 17 in 1926. She was a charter member (1926) of the Canniwai Grange and is one of the longest surviving Grange members in the state. Vera encouraged and supported her daughters and grandchildren to further their education. Many a wheat check helped with college and university tuition bills. Her grandchildren’s professions include physician, educators, Doctor of Jurisprudence, CEO of a large corporation, engineer and business owners. She is revered and loved for the support and care provided over so many decades. Her daughters view her as their mother, mentor, sister and model for life. Her family view her as a testament to a life well lived. Vera attended the Almira Our Saviors Lutheran Church and enjoyed the First Presbyterian Church in Moses Lake. Emil and Vera left the farm in 1979 to live in Almira, WA. Vera continued to keep a large flower and vegetable garden. Emil raised a large potato patch each year. Emil passed away in 1988 at age 86. They had been married 53 years. Vera continued to live in Almira until age 85, tending her flowers and garden then moving to Hearthstone Retirement Inn in Moses Lake and residing there for the past 19 years. She now resides in Columbia Crest Center also in Moses Lake. Vera has had her share of physical problems including surviving major cancer surgery at age 94 and hip surgery at 105. Most remarkable have been her powers of resiliency and recuperation. When asked what she attributes to her advanced age Vera calmly proclaims,” walk every day and eat your vegetables”. Please sign the online guestbook or leave a note for the family at www.kayserschapel.com Arrangements are in care of Kayser's Chapel & Crematory.

Vera Johnson, 108, a resident of Moses Lake and formerly of Almira passed away on May 13, 2017 at Columbia Crest Care Center. Vera has been and will be forever a lady of the Eastern Washington dry land wheat country. Born in her parents homestead... View Obituary & Service Information

The family of Vera Johnson created this Life Tributes page to make it easy to share your memories.

Vera Johnson, 108, a resident of Moses Lake and formerly of Almira...