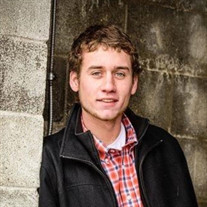 EVERYTHING was better when Tyler was a part of it! ~Grandpa Ron Tyler Lee Homesley was born in Moses Lake, Washington, on February 9, 1996, to Darci and Howard Homesley. He was a beautiful blend of two incredible people and he embodied the best of both his parents. From his mother, Tyler inherited a gentle nature full of joy that drew him to people, and drew people to him, wherever he went. He had the sense that there were no strangers in his world, just friends he hadn’t met yet. Tyler’s smile was inclusive; it made people comfortable and made him unforgettable. His joy was contagious and his motives were kind. Tyler had no sharp edges; he never raised his voice in anger. He believed the best and forgave the rest. From the day he was born, he and his dad formed an inseparable bond and Tyler considered Howard not only his dad, but his friend. Howard had no greater joy than to walk through Tyler’s shop to marvel at his latest undertaking and laugh at his latest joke. Tyler loved his sisters without reserve. Jessica was quick to look after her younger brother and Tyler was quick to look after his younger sister Rylee. They had the kind of relationship where the sun rose and set over each other’s shoulders. Tyler didn’t do drama; however, he did love to tease and was fearless in his pursuit of a good reaction and nobody was exempt. He didn’t take sides. Tyler truly understood the value of family and invested time and energy in his family every day. He thrived on helping Grandpa Ron help others with countless projects. Tyler had a gift of making each of us feel like we were the most important person to him. Grandma Sharon’s card, on one of many bouquets from Tyler, confirmed “you are my favorite person”, and for good reason. Funny enough, Grandma Betty and all of his other 10 aunts and uncles, as well as his beloved cousins, felt like we were his favorite too. Each one of us was confident of his love because he showed us generously, and often. EVERYTHING was better when Tyler was a part of it! It’s rare to meet somebody who literally changes your life. Tyler Homesley was that kind of guy to his friends. Early in his 24 years, he somehow understood that he wanted more than repetitive, mediocre routines, but instead, to create adventures full of exploring outdoors, excellent food and companionship, and inclusion of his loved ones in those dreams. He stuffed his 24 years full of life! The warmth of his smile was honest and his friendship real. He didn’t try to be anyone other than who he was; this defined him. Friendships were more than acquaintances, they were commitments to him. Every one of his friends will recall a time when he dropped what he was doing to rescue them or solve a problem. He was fearless in the face of complicated projects with a can-do attitude that matched his amazing mind and with a skill set that created marvelous designs and projects for his customers. The friends he had were diverse in age and background; one minute he was the glue holding his group of peers together around a campfire, and the next he was laughing till he cried, on the phone again with his best ole friend, uncle Darin. There were so many people that were affected by him, inspired by him; he was selfless in so many ways. His eyes sparkled with mischief as if he alone knew about something fun that was about to happen, which was usually true because he was the planner and inspiration of epic adventures great and small, with Kyle’s voice of reason and practicality and Caleb’s hesitant but hopeful executor of the plans. EVERYTHING was better when Tyler was a part of it! And then there’s Tyler’s true love “Coley”. Nicole was his world; his first thought in the morning and the last thought that went through his head before he went to sleep. He just wasn’t complete without her. He knew it and he was glad it was that way. He let her know in a thousand ways how important she was to him. The love they shared was genuine and pure and completely evident to everyone. Tyler and Coley have celebrated their “anniversary” each month on the 19th, since October of 2014. It’s obvious they were created for each other. Tyler’s commitment and love to her was rock solid and unquestionable. The ring, that Coley found hiding in Tyler’s sock drawer, assures us that he recognized the value and honor of a ring on her finger and marriage vows committing to her his love and devotion forever. Coley and Tyler were already one, unified in their goals and their ideals and most especially in their love for each other. EVERYTHING was better when Tyler was a part of it! We miss you Bud! Tyler's memorial service will be held on Saturday, July 25th at 9:00 a.m. on the lawn of Moses Lake Christian Church, 200 Yonezawa Blvd, Moses Lake, WA. Interment will follow the service at Pioneer Memorial Gardens, 14403 Rd 2 NE, Moses Lake, WA.

EVERYTHING was better when Tyler was a part of it! ~Grandpa Ron Tyler Lee Homesley was born in Moses Lake, Washington, on February 9, 1996, to Darci and Howard Homesley. He was a beautiful blend of two incredible people and he embodied the... View Obituary & Service Information

The family of Tyler Lee Homesley created this Life Tributes page to make it easy to share your memories.

EVERYTHING was better when Tyler was a part of it! ~Grandpa Ron
Tyler...