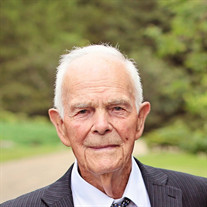 Tren Mitchell Jones passed away at his home on Friday, Sept 16, 2016 at the age of 101 in Moses Lake, WA. He was born March 1, 1915 in Cedar City, Utah. His parents were Alma Treharne and Sylvia Mitchell Jones. Tren was the oldest of five... View Obituary & Service Information

The family of Tren Jones created this Life Tributes page to make it easy to share your memories.

Tren Mitchell Jones passed away at his home on Friday, Sept 16,...