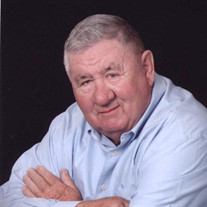 Thomas Dagnon, 75, a long-time resident of Moses Lake, passed away on December 7, 2017. Tom was born in Okanogan, WA. to Charles and Helen (Vaughan) Dagnon. He attended various schools in Okanogan County, graduating from Tonasket High School in 1960. On August 17, 1963, he married Judy Ogle and they continued living in Tonasket while Tom worked in the logging/construction industry. He also owned and operated the Chevron Station in Tonasket for a period of time. In 1965 their daughter Shelley was born and in 1967 daughter Penny joined the family. In 1969 Tom joined the Washington State Patrol where he was stationed in Moses Lake. He was a WSP trooper for 10 years and then decided to change careers and started his own excavating business which he ran until his retirement in 2009. Tom was a member of the Masonic Lodge and El Katif Shrine. He served on the Fair Board and was a life time member of the Moses Lake Round Up. Throughout his life he enjoyed hunting, fishing, snowmobiling and his various coffee-clutches. In the last seven years, Tom and Judy have enjoyed traveling in their motor home—especially to Arizona in the winters. Tom loved his Polaris side-by-side and running around the desert with friends. Tom was preceded in death by his parents and daughter Shelley. He is survived by his wife of 54 years, daughter Penny (Ed) of Moses Lake, brothers Dal (Joanne) of Tonasket and Don of Nighthawk, sisters Dorothy Nelson of Omak, and Delores Franz of Indianola as well as nieces and nephews. There will be a graveside service on Thursday, December 14 at 10:00 a.m. at Pioneer Memorial Cemetery, followed by a memorial service at the Presbyterian Church, 1142 West Ivy at 11:00 a.m. A luncheon will follow. In lieu of flowers, the family suggests donations to Assured Hospice, 1417 Pioneer Way, Moses Lake, WA 98837, or to the Cystic Fibrosis Foundation, 4550 Montgomery Ave., Suite 1100 N, Bethesda, MD 20814 Please sign the online guestbook at www.kayserschapel.com Arrangements are in care of Kayser's Chapel & Crematory.

The family of Tom H Dagnon created this Life Tributes page to make it easy to share your memories.