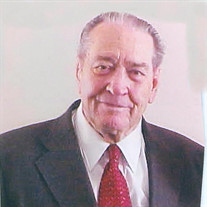 Thurn Baker, 97, a Moses Lake resident since 1952 passed away peacefully Monday morning, February 23, 2015 at his home. Family will greet friends from 6 to 8 p.m., Sunday, March 1, 2015 at Kayser’s Chapel. Viewing will also be held from 9 to 9:45 a.m., Monday, March 2, 2015 at The Church of Jesus Christ of Latter-day Saints, Stake Center, 1515 S. Division. Funeral services will begin at 10 a.m. at the Stake Center. Interment will follow at Pioneer Memorial Gardens. Please sign the online guestbook or leave a note for the family at www.kayserschapel.com Arrangements are in care of Kayser’s Chapel & Crematory. Thurn was born on June 9, 1917 in Basin, Idaho to Lena Annette Polson and Abraham Arnold Baker, fourth of seven children. He attended schools in Roy, Utah, Shelly and Firth, Idaho, graduating from Weber County High. He worked in construction as a youth and in 1939, he helped build Deer Creek Dam. He served from 1941-1943 in the Central States Mission for the Church of Jesus Christ of Latter-day Saints. He met Ardath Hoggan in Burley, Idaho and was married in the Salt Lake Temple Sept. 16, 1943. He then served in WWII as a B-29 navigator-bombardier and was commissioned a second lieutenant in the Army Air Corps. After the war, they farmed in Burley, Idaho, Nyssa, Oregon and then Moses Lake, Washington. Thurn was a successful farmer as he opened up the area in the Columbia Basin. He was always busy with the farm, church, and family. He served as Stake President in Moses Lake for 14 years and then president over the Canada Halifax Mission from 1973-1976 and a Regional Representative to the Twelve for 8 years. His wife Ardath passed away in October 1978. He married Charlene Hinman Hansen on December 17, 1979. He was a temple worker and sealer in the Seattle, Provo, and Mt. Timpanogos Temples. He loved missionary work. He served 6 full time missions including the Los Angeles Temple Visitor Center, England London North, Washington DC North and Salt Lake Family History Mission working on the Ellis Island project. He was a great teacher of the scriptures especially the New Testament. Thurn was a hard worker. He blessed the lives of his family. He was always willing to serve whenever needed including the scouting program, the youth and the community. He loved horses and hunting in the mountains, as well as traveling and seeing the world. He was known by others as a straight arrow. There was never a question about the right thing to do. He was a direct participant in many of the grand events in American history during the 20th century and devoted his life to making a comfortable life for his family and serving the Lord. His wife Charlene died December 23, 2011. Thurn is survived by his six children, six step children and an Indian foster daughter; Claire Baker Hess of Orem, UT, Hugh (Lila) Baker, Moses Lake, WA, Garth (Katrina) Baker, Moses Lake, WA, Leon (Lorraine) Baker, Moses Lake, Elizabeth Baker Fielding, Orem, UT, Reid (Lori) Baker, Moses Lake, WA, Arlo E. (Verlene) Hansen, Glenwood, Alberta, Canada, Arlene (Tom) Helton, Springville, UT, Nola Jane (Joseph) Morton, Houston, TX, Glorya (Bill) Seal, Tigard, OR, Camille (Gerald) Thompson, Estacada, OR, C. Rex (Pam) Hansen, West Bountiful, UT, Ardath Hendrickson (Sam) Peterson, Kechikan, Alaska; sixty-nine grandchildren and one hundred twenty-nine (and growing) great-grandchildren.

The family of Thurn James Baker created this Life Tributes page to make it easy to share your memories.