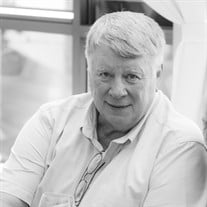 Thomas "Tom" Scott Jarman passed away on Tuesday, March 13, 2018 at Sacred Heart Medical Center. He was born January 9, 1950 in Grand Forks, North Dakota to Art and Marilyn Jarman. Tom's first years were spent in Larimore, North Dakota until his family moved to Moses Lake in the early 1950's. He enjoyed growing up in Moses Lake with many good friends and participating in many sports activities, graduating from Moses Lake high school in 1968. Upon graduation, Tom accepted a full football scholarship to the University of Idaho and played as a defensive end and outside linebacker for all four years. High school and college years held so many great memories that Tom would speak of often. In the Fall of his sophomore year, Tom traveled across the state line to WSU and met his future wife, Janet. For the next 3 years, the road between the U of I and WSU was well traveled. In July of 1972, they were married and settled in Yakima. While in Yakima, Tom accepted a job with Inland Electric and began his career, moving to Moses Lake in 1977 as manager of CED. There he raised his three children with his wife in their family home of almost 40 years on the lake. He taught them to fish, hunt, ski, the true meaning of family and unconditional love. As the years passed, he also took managerial positions with North Coast and Stoneway Electric. He made so many great friends through business contacts. After retirement in 2012, he truly missed the conversation and presence of these friends. Retirement meant Tom and Janet had time to travel and they took advantage of this time. Travels took them many places, but perhaps their favorite was visiting their grandchildren in California. Tom is survived by his wife Janet; son Matthew; daughter Jennifer; son Nick; and their wonderful spouses. Also, grandsons Tyler, Jayden and Taryn; and granddaughter Julia. Brothers; Jay Barnett, Jim Jarman and sisters; Patty Kuhfeld, Lori Barnett and Jan Anderson. Tom was preceded in death by his mom, Marilyn, father, Art and brother, Bob. Services will be held at Immanuel Lutheran Church on Friday, March 23, 2018 at 1:00 p.m. In lieu of flowers, memorials can be made to Shriner's Hospitals for Children, 911 W 5th Ave., Spokane, WA 99204. This was a favorite charity of Tom's. Please sign the online guestbook or share a memory with family at www.kayserschapel.com Arrangements are in care of Kayser's Chapel & Crematory, Moses Lake.

The family of Thomas "Tom" Jarman created this Life Tributes page to make it easy to share your memories.