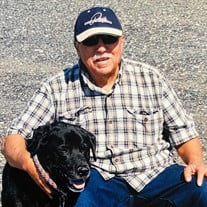 Terry Lee Cafferty, 74, a long time Moses Lake resident, passed away Friday October 26, 2018 in his home surrounded by family after a courageous battle with cancer. Terry was born on March 11, 1944 in Logan, Utah to Gilbert and Ida (Nuffer) Cafferty. In 1962 Terry graduated from Caldwell High School. He enlisted in the Idaho Air National Guard from 1961 until being honorably discharged in 1967. Terry married the love of his life Tana Harrison on March 17, 1967. They started their family with the birth of their first son in May of 1969. Following the birth of their second son in June of 1972, Terry and Tana followed friends to Moses Lake in 1974. During his life in Moses Lake he welcomed two daughters, the first in 1981 and the second in 1984. He retired in 2003 from his career of 27 years as a truck driver. Terry was a man of many hobbies and passions; in the late 1960’s and early 1970’s he was very involved with off-roading and racing jeeps, this paved the road to other hobbies such as motorcycles and 4-wheelers in the 1980’s. In the 1990’s he reached the highlight of his passion for racing, he and his family became involved in the open wheeled modified racing world for the following decade. Among these adventures Terry loved fishing in Westport, Wa with his family by his side along with countless trips to the beach to search for agates. He was an avid sports fan and could always be found watching the Seahawks, Mariners and NASCAR. Terry was preceded in death by his father Gilbert, his mother Ida, his sister Edris, his brother Delano, and his beloved dog Brady. Terry is survived by his wife Tana, his children Tyrone Cafferty, Stan (Tina) Cafferty, Tara Cafferty, and Stacy (Jose) Hernandez, his grandchildren Travis, Samantha (Alex), Tyler, Tristen (Cole), Makenzie (Chase), Remi, Frederic, Taylor, Tanner, and Megan, his great-grandchildren Justice, Charleigh, Buckley, Henry, Hudson, and Wesley, his sister Barbara (Leness) Smith and his brother Tim (Rikki) Cafferty. His memorial service and celebration of life will be held Friday November 9th, 2018 at 1:00pm at the Elks Lodge, 814 N. Stratford Road, Moses Lake, Wa., 98837.

Terry Lee Cafferty, 74, a long time Moses Lake resident, passed away Friday October 26, 2018 in his home surrounded by family after a courageous battle with cancer. Terry was born on March 11, 1944 in Logan, Utah to Gilbert and Ida (Nuffer)... View Obituary & Service Information

The family of Terry Lee Cafferty created this Life Tributes page to make it easy to share your memories.