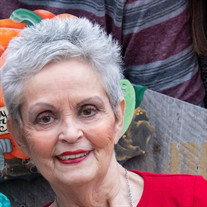 Teresa “Tedde” Ann Delgado Pierce Harrod of Moses Lake, Washington returned home to her Heavenly Father on Thursday, February 14, 2019 at the age of 79. She passed peacefully with her husband, Jerry by her side. Tedde was born to the late Ignasio A. Delgado (1920-1961) and Helen Lucille Pierce (1920-1950) in Pocatello Idaho on June 19, 1939. At the age of two she came to live with and was adopted by her grandparents Jonathan Wesley Pierce (1892-1953) and Esther Risenmay (1901-1991). She was raised with their children Harvey Eugene, Robert Dale, Lois Awanh, James Wesley who are all deceased and Esther Lorine still living. She attended High School in Vale, Oregon where she met her high school sweetheart Gerald Wayne Harrod. They were married May 22, 1958 in Vale, Oregon and were later sealed for time and all eternity in the Idaho Falls temple on May 21, 1962. Tedde was active in the Church of Jesus Christ of Latter-day Saints and held many callings throughout the years including Primary, Relief Society and Young Women’s plus other various callings. She always served valiantly and with all her heart and talents. She worked as a secretary for most of her life with her last job working for the school district in Moses Lake, Washington. Later in 2009 she served a mission with Jerry in Salt Lake City, Utah on Temple Square in the Genealogy Library doing what they loved together. Tedde loved to sew, draw and do crafts. She was a fervent reader and loved her family. Tedde is survived by her husband Gerald. Her daughter Lori (Ronald) Gatter, son Michael (Terri) Harrod and son Timothy Lowell (1966-1968) who preceded her in death. She has six grandchildren Brandon (Kelsea) Burton, Drew (Kylie) Burton, Dax Harrod, BreeAnn Hamersly, Dane (Stephanie) Harrod, Jerilyn (Brandeis) Truman. She is blessed with 12 Great-Grandchildren that lovingly call her “GG.” Tedde has requested that no services be held at this time and her family is honoring that request. The family has requested that if you would like to send a memorial donation, you may send them to: Assured Hospice, 1417 S. Pioneer Way, Moses Lake, WA 98837.

Teresa &#8220;Tedde&#8221; Ann Delgado Pierce Harrod of Moses Lake, Washington returned home to her Heavenly Father on Thursday, February 14, 2019 at the age of 79. She passed peacefully with her husband, Jerry by her side. Tedde was born... View Obituary & Service Information

The family of Teresa Ann Harrod created this Life Tributes page to make it easy to share your memories.