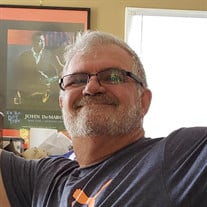 Steven Glen Stewart, age 59, a longtime Portland area resident passed away in his hometown of Moses Lake, Washington on Monday April 13th at 7:17pm. Steve fought stage 4 cancer remaining independent until moving in with his sister Wanda, a Certified Nurses’ Aid, to spend his final days with family. Steve was born on June 1st, 1961 in Ernest Harmon Air Force Base in Stephenville, Newfoundland. He grew up in Moses Lake and graduated Moses Lake High School in 1980. In his 20’s, Steve attended Mt. Hood Community College in Gresham, Oregon. He earned a “Strawberry Award” for “Innovation, Creativity and Commitment in Support of Mt. Hood Community College” and graduated with an Associate Degree in General Studies in 1987. He was an avid reader, kept an extensive library, and was pursuing his bachelors degree. Steve joined the Army National Guard in 1987 and was selected as an “Outstanding Young Man in America” in recognition for “Outstanding Professional Achievement, Superior Leadership Ability and Exceptional Service to the Community” that year. He earned Army Service ribbons for “M-16 Rifle Marksman” and “Hand Grenade Expert”, a “Certificate of Appreciation” in Field Artillery, and a “Certificate of Merit” for saving a mans life with CPR, before his discharge in 1995. In Portland, Oregon, Steve was a fixture in the fellowship of Alcoholics Anonymous since the mid 1990’s. He liked to help people and had many A.A. service positions over the years, including meeting secretary and sponsor. He also served as a member of H&I and brought meetings into the Hospitals and Institutions throughout the Portland area. Known affectionately in the rooms of A.A. as “Angry Steve”, he touched the lives of many alcoholics and truly had a heart of gold. He liked to meet up for coffee with other sober people before and after the meetings, he loved having conversations with anyone, often complete strangers. Steve was a great storyteller, using his dynamic vocabulary and great memory to illustrate history and details. He got sober in 1995, in his mid 30’s, and received his 25 year chip in February. He died still carrying the message of A.A. Steve was a car guy, he had a Corvette and also loved to collect and build model cars. He was also a music guy, a fan of all kinds of music, from classic rock and blues, to new wave, punk rock, alternative rock and grunge, he thrived on going to concerts and hanging out at music venues. Steve had a strong work ethic, serving as a Union Roofer in the Portland area for 32 years. Steve was survived by his father Glen Stewart, older brother Kenny Stewart, younger sisters Wanda Stewart, Heather Topping, Patricia Dorrity, and step-sister Kaytlin Martin. Steve was also survived by numerous Cousins, Nieces and Nephews. His mother Pauline Johnson preceded the deceased. A memorial BBQ will be held on June 1, 2020 beginning at 2:00 p.m. at 8341 Rd 10 NE, Moses Lake, WA.

The family of Steven Glen Stewart created this Life Tributes page to make it easy to share your memories.