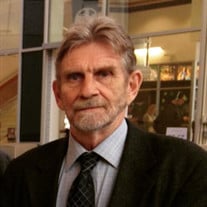 The family of Steven V. Cserepes created this Life Tributes page to make it easy to share your memories.

“When we treat people merely as they are they will remain as...