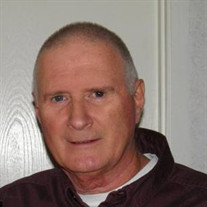 Steve Gallop, 69, a resident of Warden passed away Wednesday, January 3, 2018 at Samaritan Hospital. He was born in Winnipeg, Manitoba, Canada on March 31, 1948, son of Ronald and Betty (Goolsby) Gallop. He served in the U.S. Army from 1969 to 1972. Steve was married to Jan on February 14, 1986 and most recently lived in Warden. Survivors include his wife, Jan; daughter, Ginger and family; son, Jonathan and family; and brother, Dave and family. Although Steve was born in Canada, the family moved to Missouri where his dad ran a Christian camp for several years. He loved to tell people that he attended a one-room school house for grade school. After a flood, the family moved to Yakima where he attended middle school. Another move took the family to Beaverton, Oregon for part of high school where he met his 2 life-long friends (Ed and Dave), and finally graduated from Mark Morris HS in Longview, WA. After high school graduation, Steve attended Briercrest Bible College in Canada, before he felt the tug to join the US Army and went to Vietnam where he served as a helicopter repairman. Following the military, he attended community colleges and had a variety of jobs over the years: police officer, US Forest Service, construction, facility manager, pastor and school teacher. Steve was very proud of his accomplishments in earning a bachelor's degree from George Fox University and two masters' degrees from Western Seminary and Heritage University. Steve committed his life to Christ at an early age and often told the story of leading one of his grade school friends to Christ. The number one priority in his life was his relationship with Christ and it touched every other area -- family, friends, and work. He truly lived out the fruit of the Spirit. This has been confirmed by the encouraging words that many friends have shared with the family in the last few days. "But the fruit of the Spirit is love, joy, peace, patience, kindness, goodness, faithfulness,  gentleness, and self-control." Galatians 2:22-23 A celebration of Steve's life will be at 2 PM, Sunday, Jan. 14 at the Moses Lake Alliance Church.

Steve Gallop, 69, a resident of Warden passed away Wednesday, January 3, 2018 at Samaritan Hospital. He was born in Winnipeg, Manitoba, Canada on March 31, 1948, son of Ronald and Betty (Goolsby) Gallop. He served in the U.S. Army from 1969... View Obituary & Service Information

The family of Stephen "Steve" Gallop created this Life Tributes page to make it easy to share your memories.

Steve Gallop, 69, a resident of Warden passed away Wednesday,...