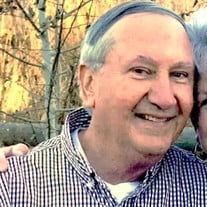 Stephen Gerald Cain, 71, passed away on Wednesday, October 24, 2018 after battling bone cancer. Steve was born on October 19, 1947 in Seattle, WA. He was the oldest child of Robert Arthur (Tod) Cain and Julia Kathryn Jones (Hermosa Beach, CA). Nearly a year later, Steve’s little sister, Candi, was born and their family was complete. Steve’s parents divorced when he was young and he moved to Bishop, CA with his mom and sister. As a youth, Steve participated in baseball, basketball, and track. He graduated from Bishop High School in 1965. Steve then attended two separate community colleges before being drafted into the Vietnam War. Steve completed a tour of duty with the US army 25th Infantry from February 1969 until his honorable discharge in January 1971. Steve was awarded the Purple Heart, the Bronze Star, and other awards during his military service. In September 1972, Steve met his sweetheart, Michele Bernice Hall. They were married in Carson City, Nevada on June 16, 1973. Then, on April 26, 1978, Steve and Michele were sealed for time and all eternity in the Manti, Utah temple of The Church of Jesus Christ of Latter-day Saints. Together, Steve and Michele had four children: Isaac, Jeanné, Samuel, and Anah. Steve worked as a laborer for Union Carbide cleaning filters that were used in a tungsten mine. After a few years, Steve transferred into the lab and began work as a chemical lab technician. When the tungsten mine shut down, Steve accepted a similar position at Union Carbide’s polysilicon plant in Moses Lake, WA. Steve and his family moved to Moses Lake in 1984. Steve retired from ASIMI in 2004. Steve cherished his membership in The Church of Jesus Christ of Latter-day Saints. He served in many capacities in the church, but his favorite was as a counselor in the bishopric of the Young Single Adult ward from 2000 to 2004. Another highlight was serving a full-time mission with Michele in Window Rock, Arizona from September 2009 to September 2011. Steve and Michele grew to love the Navajo people and particularly enjoyed teaching about self-reliance throughgardening. Steve enjoyed hiking, gardening, family history, and watching baseball. Steve was an avid Seattle Mariners fan. He also enjoyed cheesecake, a good book by John Grisham, and spending time with family. His family will miss his dry wit, his listening ear, and his one line emails. Steve is survived by his wife of 45 years, Michele, his children Isaac (Heidi), Jeanné (R. Bryant) Condie, Samuel (Stefi), Anah (Terry) Wilcox, and fourteen grandchildren. Steve is also survived by his sister, Candice Ann Cain, and cousins in San Diego and Seattle. Funeral services will be held on Tuesday, October 30, 2018 at 2pm at the Grape Drive chapel of The Church of Jesus Christ of Latter-day Saints. Interment will follow at Guarding Angels Cemetery.

The family of Stephen Gerald Cain created this Life Tributes page to make it easy to share your memories.