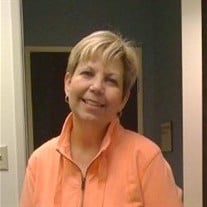 Sherry's Story Sherry's journey began January 28, 1956, to the proud parents Lyndon Fred Barkle and Ruth Ellen Sandall. She was born and raised in Moses Lake , number seven, in a blended family of eight. She grew up in a loving home, and graduated from Moses lake in 1974. Shortly after graduation she moved to Spokane with friends where she worked at a nursing home briefly, before returning to Moses Lake. Shortly after returning to Moses Lake, she reconnected with Bob Dompier through the Jeep club. He soon became the love of her life and her best friend. They married in 1979, and began their beautiful family in 1983 with son Seth. Surprising everyone, Zach quickly followed in 1985. Sherry loved her boys fiercely and embraced all of their hobbies and sports. She never missed a chance to support them in every adventure they took. From wrestling tournaments, to demo derbys, she attended every single event, even if it meant driving over a thousand miles to get there. Sherry knew how to cultivate a friendship, but most of all, she knew how to nurture a relationship. She always had the perfect combination of sincerity, trust, and understanding, that made a person feel at home. Sherry was an amazing friend, and the perfect partner in crime. Not only was she warm and thoughtful, but she was playful and mischievous. She consistently took part in local fundraisers, and recently joined the Lioness Club. She was selfless, and enjoyed volunteering her time to others, as well as giving gifts to friends and family. Her sons display those same wonderful qualities that she was known for. Seth is genuine and trustworthy, and Zach is witty and unbelievably generous, just like their mom. She was proud of her career as a purchasing agent for over thirty years, and her bubbly personality brought joy to all those she worked with. Her larger than life smile and personality will live in the memories of her friends and family. It is hard to forget someone who gave us so much to remember. Survivors include her husband, Bob; two sons, Seth Dompier and Zach (Sara; step grandchildren, Azaray and Anthony) Dompier; three brothers, Randy (Susan) Barkle, Kevin Barkle, Reo (Patti) Barkle; two sister, RuEllyn Benedict, Joyce (Don) MeGregor. Sherry got her wings September 15, 2017 at Providence Sacred Heart, surrounded by her loving family and friends. A celebration of her life will be held at 2pm, Friday September 22, 2017 at Moses Lake Presbyterian Church, 1142 West Ivy. Please sign the online guestbook or leave a note for the family at www.kayserschapel.com Arrangements are in care of Kayser's Chapel & Crematory. In lieu of flowers, donations can be made to the Lioness club for a scholarship in Sherry's name.

Sherry's Story Sherry's journey began January 28, 1956, to the proud parents Lyndon Fred Barkle and Ruth Ellen Sandall. She was born and raised in Moses Lake , number seven, in a blended family of eight. She grew up in a loving home, and graduated... View Obituary & Service Information

The family of Sherry Dompier created this Life Tributes page to make it easy to share your memories.