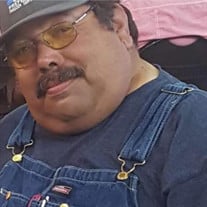 Santos Martinez Pruneda Jr. 62 of Warden Washington gained his wings February 21, 2022. Born to Santos and Esperanza Pruneda on January 1, 1960 in Monterrey, Nuevo Leon Mexico, he came to the United States at the age of eight weeks with his migrant parents and lived in Warden his entire life. As a child he spent a lot of time on Bob and Ardis Whitaker's land and was treated like family. He dropped out of high school his sophomore year and went to work at Chef Reddy. When Mt. St. Helens erupted in 1980, Santos joined the Warden Volunteer Fire Department, Grant County 4, where he remained until his retirement in 2019. He worked for various farmers including the Cox family who treated him like he was one of their own. In 2005 he got his CDL and truck driving became his life. He was known for his realist cow sounds and bib overalls and loved by many. He was always happy with big smiles at gatherings and he loved to play with the kids as he was such a big kid himself. He is survived by his wife of 21 years Kim, ex-wife Pattie, seven children Synthia, Amber, Santos Jr. III, Alice, Kimberly, David, Geronimo, eight grandchildren Cameron, Patricia, Helen, Arabella, Nikolas, Roxanne, Jayce, Emmett, brother Tomas, sister Idolina, sister-in law Tonya, nephews Alex, Joseph, Tomas Jr., Ian, Shane, George, nieces Camila, Graciela, Aneissa, Idolina, Ruth, and close friend Stacey. He was preceded in death by his parents, sister Graciela, and granddaughter Desiree. Viewing will be on Wednesday, March 2, 2022 at Kaysers 831 S Pioneer Way, Moses Lake from 3pm to 7pm. The service will be held on Thursday March 3, 2022, 11:00 at Queen of All Saints Catholic church in Warden followed by the burial at Sunset Memorial Garden cemetery in Warden.

Santos Martinez Pruneda Jr. 62 of Warden Washington gained his wings February 21, 2022. Born to Santos and Esperanza Pruneda on January 1, 1960 in Monterrey, Nuevo Leon Mexico, he came to the United States at the age of eight weeks with his... View Obituary & Service Information

The family of Santos Martinez Pruneda Jr created this Life Tributes page to make it easy to share your memories.