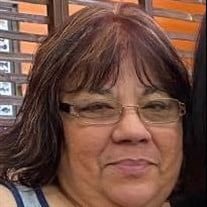 Sandra Zamora Flores a life long resident of Moses Lake WA passed away on April 14, 2021 at the age of 60 due to complications of COVID. Sandra known as Sandy is survived by her husband Alfredo Flores Sr.; children: Audra Turner (Michael); Samantha Flores; Sonya Marie Gutierrez (Noel Dagoberto); Alfredo Flores Jr.; Parents: Pete Jr & Gloria Zamora; siblings: Sonia Mora; Shirley Mende (Michael); Pedro Zamora III (Veronica); grandchildren: Savannah, Quirino, Brooklynn, Alyson (Penny), Jeremiah (Miah), Dylan, Calob, Jaden, Noel Jr., Isaiah, Christian, Braden, Julian, Audrina & Keelin. And other aunts, uncles, nieces, nephews & relatives. She was preceded in death by her in-laws Fernando Sr. and Maria Rita Flores; nephew Brandon Mende; brother in law Frank Mora Sr and uncle Benito “Benny” Zamora. Sandy was born in Carrizo Springs TX on December 29, 1960. Sandy followed parents to Washington in 1962. Sandy grew up in the Peninsula area and attended Moses Lake area schools. Sandy graduated from Moses Lake High School in 1979. Sandy welcomed her first born, Audra in 1981. Shortly after she married the love of her life Fred Flores on December 21, 1983. Later they welcomed three beautiful children of their own: Samantha, Sonya & Freddy. Her children were the most important part of her life. She was a devoted wife, mother, grandmother, daughter and sister. Sandy was employed by Aging & Adult Care as a caretaker and she loved her job. Sandy loved gardening and shopping but she never missed a step when it came to getting her pedicures. If you knew Sandy you know her as the life of the party at Tejano night. She is also the Dallas Cowboys #1 fan. When it came to her grandchildren she would move heaven & earth to make anything possible for them. She will be deeply missed by family, friends and all who knew and loved her. Services will be held on Thursday the 22nd privately for immediate family only. Flowers, donations and condolences can be sent to 2312 W. Willow St. Moses Lake WA 98837.

Sandra Zamora Flores a life long resident of Moses Lake WA passed away on April 14, 2021 at the age of 60 due to complications of COVID. Sandra known as Sandy is survived by her husband Alfredo Flores Sr.; children: Audra Turner (Michael);... View Obituary & Service Information

The family of Sandra Flores created this Life Tributes page to make it easy to share your memories.