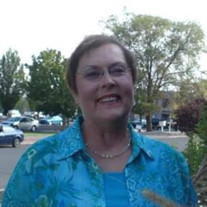 Sandra (Sandy) M. Blazer, lifelong resident of Moses Lake, Washington passed away on Tuesday, January 19, 2021 at Central Washington Hospital in Wenatchee, Washington after her losing her battle with a virulent form of cancer. In those last two weeks of her life Sandy fought courageously, even though she knew the odds of beating this terminal disease would ultimately claim her life, but not her spirit. Sandy’s unwavering faith in God served to give her peace at the time of her passing. Sandy was born on April 8, 1951 to Elma and Don Swanson. After high school Sandy pursued a nursing career at Deaconess Hospital in Spokane, WA but it became apparent Sandy was a caregiver to all- just not in the nursing field. She returned to Moses Lake in 1970 to work as an office assistant and payroll manager for her father’s car dealership, Don Swanson Motors, and served in that capacity until 1994. In the interim she met her future husband, Paul Blazer in 1972 and they were married the following year in September, 1973. Sandy and Paul were delighted to add to their family in December of 1976 with the birth of their daughter, Holli Marie. Sandy joined the Samaritan Hospital team as a phlebotomist in 1994 and continued in that capacity until 1999 where she transitioned to become an educational assistant for the Moses Lake School District until medical issues forced her early retirement in 2006. Sandy exemplified all the attributes you would want in a wife, mother, friend and devoted aunt to her nieces and nephews. She enjoyed spending time with family and friends and was very involved in her church – Living Word Lutheran Church in Moses Lake. She was an amazing cook and would be mesmerized for hours watching cooking shows to try the newest recipes for Paul and Holli. She was an accomplished craftsperson in needlework: embroidery, crocheting and knitting. Sandy could just look at material swatches and envision making something that would be a beautiful keepsake. Sandy is survived by her husband, Paul; their daughter, Holli Marie; brother, Richard Swanson and wife Christine Swanson; sisters and brother in laws, Ruth Ann Blazer, David and Susan Blazer, Joel and Claudia Blazer, John and Christine Blazer, Mark and Sharon Blazer, Sam and Joan Blazer and Daniel Blazer and numerous aunts, uncles, cousins, nieces and nephews who will miss her dearly. Services will be held on Saturday, February 13, 2021 at 11:00 a.m. at The Living Word Lutheran Church, 2609 West Broadway Avenue, Moses Lake, WA.

Sandra (Sandy) M. Blazer, lifelong resident of Moses Lake, Washington passed away on Tuesday, January 19, 2021 at Central Washington Hospital in Wenatchee, Washington after her losing her battle with a virulent form of cancer. In those last... View Obituary & Service Information

The family of Sandra M Blazer created this Life Tributes page to make it easy to share your memories.