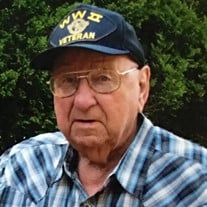 Roy M. Holm, of Moses Lake, WA died on Wednesday, February 21, 2018. He was 91. Roy was born on August 16, 1926 in Fairdale, Oregon in the beautiful Willamette Valley. Dad attended elementary school in Fairdale, where he grew up having fond memories of going into the woods to get the cows with his dog "Pupper" and bringing them back home for milking on the family farm. He also spoke of working with his father, clearing brush from the telephone right-of-way. After graduating from Carlton High School, Roy enlisted into the Navy, becoming a tail-gunner on a PBM and serving in the South Pacific. Upon returning to the Carlton area, he married Joyce Wood and they had three children together. In 1954, Roy and Joyce moved their family to Renton, Washington to work for Boeing, then in 1955 they transferred to Moses Lake. After the closure of Boeing in Moses Lake, Roy decided not to return to the "wet" side and remained in Moses Lake where he worked for various employers and also became a Moses Lake Police Reservist in the 1970's. Starting in 1980, one week after Mt. St. Helens blew, dad spent the next 15 or so summers working for Big Creek Fisheries on Bristol Bay, Alaska where he was given the nick name "Gramps." When Roy finally retired, he spent much of his time at Bob's Café with the Coffee Clutch where world problems were solved, "No Dead Bread" or up at the "Stump Ranch" in Chiliwist. Roy is survived by his sons, Mike and Gary (wife Kathy); daughter, Pat; 8 grandchildren, 14 great-grandchildren; and 1 great-great grandchild due in May; brothers Bill (wife Elaine), and Arlie (wife Lynn); and numerous nieces and nephews. A memorial service with military honors will be held at Guarding Angels Cemetery in Moses Lake, Washington on Friday, June 15, 2018 at 10:00 a.m. Memorial contributions are welcome at Grant County Humane Society or your favorite charity.

Roy M. Holm, of Moses Lake, WA died on Wednesday, February 21, 2018. He was 91. Roy was born on August 16, 1926 in Fairdale, Oregon in the beautiful Willamette Valley. Dad attended elementary school in Fairdale, where he grew up having fond... View Obituary & Service Information

The family of Roy Holm created this Life Tributes page to make it easy to share your memories.