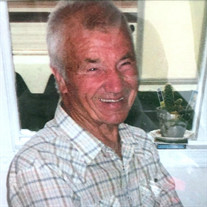 Roy B. Anderson, 92, Moses Lake resident passed away on Wednesday, August 22, 2018 at LakeRidge Solana Care Center. Roy was born April 25, 1926 to Walter and Grace Anderson in Mount Vernon, Washington and moved to Alaska when just an infant, left Alaska in 1937 back to WA. He lived in southern Idaho before moving to Canada when he was a teen. Being the oldest, he left school after grade 10 to work and help support his family as his father was overseas during the war. He had many job experiences, cowboying at Douglas Lake Cattle Ranch, hauling logs down the treacherous old Fraser Canyon highway. He was a carpenter and built many houses in Canada and Arizona. After moving back to the US in the 70’s, Roy and Johanna went trucking, hauling cargo throughout the western states and had lots of stories to tell of his many experiences. His last work was moving and setting up mobile homes in Washington state. Our father was a happy and gentle man, well liked by all who knew him and loved dearly by his family. The stories he told us of his life experiences are now memories we will cherish. Survivors include his wife, Johanna; children, Linda (Pat) Ingram, Terry (Brian)Hamilton, and Dean (Vern) Anderson; grandchildren, Cheryl, Catherine, Sean, Alison, Dylan , Ashleigh, Adam, Dax, and Kaili; great-grandchildren, Abigail, Silas, Sarah, Caitlyn, Jack, Keri Lyn, and Jaymie, all from BC Canada; siblings, Pat Buchanan of Palo Alto, California, Alan (Nancy) Anderson of Nanaimo, BC, Dr. Mary-Lou Klein of Berrien Springs, Michigan, Margaret Anderson of Hagensburg, BC, Andrew (Inge) Anderson of Adams Lake, BC, and Joan (Harvey) Hathaway of Rutland, BC; former spouse Connie Johnson of Chase, BC; and numerous nieces and nephews. Roy was preceded in death by his parents, Walter and Grace; sister, Ann Anderson; brother, Bill Anderson; and daughter Shirlee Hodacsek. Please share a memory with family.

The family of Roy B Anderson created this Life Tributes page to make it easy to share your memories.

Roy B. Anderson, 92, Moses Lake resident passed away on Wednesday,...