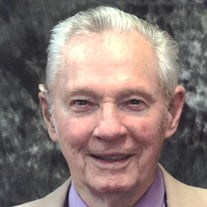 Pastor Ross Sterling August 3, 1924 Ross made his arrival to Sherman and Adeline (Pittman) Sterling in Latah, Washington and 93 years and one day later he made his last stop in Moses Lake, WA on his way to his final reunionin heaven with the... View Obituary & Service Information

The family of Ross W Sterling Sr. created this Life Tributes page to make it easy to share your memories.