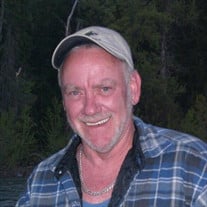 Roger Alan Field, 67, passed away on 6/22/19 in his home surrounded by loved ones after a 3 month battle with cancer. Roger was born on 10/18/51 in Bismarck ND. His family moved Vancouver WA in 1954 then moved to Moses Lake in 1967. He always had a cheerful attitude and was always joking around. Roger rode a Stingray banana seat tricked out custom bicycle to Basic American everyday for two weeks trying to get hired. Once he wore them down they finally put him to work and he continued riding that bicycle until he turned 18 and was able to get a drivers license. From there he was hired by G & O Trucking and drove until 1992. Then he accepted a position at Weyerhaeuser driving trucks. Weyerhaeuser sold out to International Paper in 2008 and he was given a choice of staying with IP or taking a position with the company that IP outsourced the deliveries to. Roger chose to stay with IP as a fork lift operator loading the trucks. Roger loved to fish and hunt and was doing one or the other as often as possible. He also had a huge heart and was very generous to everyone. One time when we were having our automatic sprinkler system installed he BBQ’d venison steaks for all the workers. And when it came to fishing I’ve never seen anyone who could top his speed and accuracy in cleaning and filleting fish. He loved to invite family and friends over for a fish fry on the patio. It was always a fun time with delicious walleye with his own recipe of beer batter and dipping sauce. He had a special spot at Cascade Valley where he liked to fish. When other people fishing near him saw him catching fish after fish while they weren’t getting any Roger would show them what he used for bait and any other tricks he used and soon they were catching fish too. When our freezer was full he would walk around the park and offer the campers the fish he caught. If there were no takers he released them back into the lake. Roger is survived by his wife, Pam (Storey) Field, daughter Pilar (Mark Lopez) Field, and son Elmer Field. He also has 7 grandchildren: Balen, Meleena, Zoey, Kory, Erika, Lizabeth and Kaden plus 4 great-grandchildren and another on the way. He is survived by siblings Kathy (Daryl) Felts, Elmer (Neica) Field, Diane Sharp and Robert Field and numerous nephews and nieces and of course his 4-legged shadow, Griz. He was preceded in death by his parents, Elmer Field and Olga Hunt. Also siblings Lois, Wanda, Ed and Sandi. The service will be held Saturday, July 13th at Lakeview Missionary Church at 2pm.

The family of Roger Alan Field created this Life Tributes page to make it easy to share your memories.