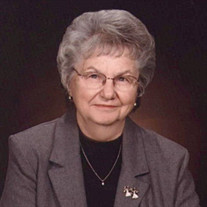 Rogene A Johnson, 85, longtime Moses Lake resident passed away Monday, March 20, 2017 at Central Washington Hospital. Rogene was born May 30, 1931 in Swedeburg, NE to Victor and Esther Pearson. In the late 1930’s her family moved to Selah, WA where she grew up on the farm with her four siblings. Rogene’s mother, being a piano teacher, helped instill in her a lifelong love for music. After high school she worked for Bell Telephone Company. On June 14, 1952, Rogene married Donald H. Johnson. Don preceded her in death in 1995. The family moved to Moses Lake in 1961 where she worked at Beck’s Lakeview Florist and continued to work at Lakeview through three different owners, also working at the Posey Pantry. She completed her career after twenty years with the Washington Potato Commission as a print operator. Rogene was a member of the First Presbyterian Church for over 50 years being active in the Presbyterian Women’s Association and loved working on the annual church bizarre, decorating the sanctuary for holidays and singing in the choir. She enjoyed playing cards with her card group, and especially loved a game of pinochle with family members often extending into the wee hours of the morning, and was always ready to put a puzzle together. She was proud of her flower gardens, especially her roses, and always cut a flower or two to bring into her home. She loved living in Broadway Estates and was ever present with a cup of coffee to share with her neighbors. Rogene’s family was the love of her life. Nothing made her happier than when a grandchild or great grandchild came to visit. Rogene is survived by daughters, Sue & Les Torrence, Lugene & Dave Helms, Donna & Fred Haynes, and Son, Kert & Cara Johnson. Eight grandchildren, Brian (Brooke) Torrence, Brent Torrence, Scott (Kim) Helms, Mark Helms, Kerry (MicHael) Moore, Kacey (Miguel) Perez, Emily Johnson and Justin Johnson. Seven great grandchildren, Emma Torrence, Keira and Ava Helms, Amaya and Mateo Perez, Landon and Harper Moore. Rogene is also survived by her twin brother Rodger (Maridee) Pearson, sister Carol Gustafson, sisters-in-law Beryl Pearson and Barbara Johnson, and brother-in-law Wally (Shirley) Johnson. Besides her husband, she was also preceded in death by her sister, Elaine Lundberg, brother James Pearson, and a grandson Joseph Ottmar. Viewing will be held from 9 a.m. to Noon on Saturday, March 25, 2017 at Kayser's Chapel and from 8 to 9:30 a.m. on Monday, March 27, 2017 at Kayser's Chapel. Graveside services will be held at 10 a.m., Monday, March 27th at Pioneer Memorial Gardens followed by a memorial service at 11 a.m. at the Moses Lake Presbyterian Church, 1142 W. Ivy. Memorials may be made to the Presbyterian church.

Rogene A Johnson, 85, longtime Moses Lake resident passed away Monday, March 20, 2017 at Central Washington Hospital. Rogene was born May 30, 1931 in Swedeburg, NE to Victor and Esther Pearson. In the late 1930&#8217;s her family moved to Selah,... View Obituary & Service Information

The family of Rogene Johnson created this Life Tributes page to make it easy to share your memories.