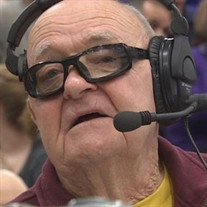 Robert Mel Olson, 89, passed away July 3, 2018 in Moses Lake, WA. Mel was born on July 22, 1928 in Yakima. He was preceded in death by his Parents, John and Edna, and brother John. He is survived by his spouse of nearly 70 years, Vicki, daughters Pam Sharp(David), Kennewick, and Jan Jordan(Alan), Richland, and grandchildren, Jaime Sharp, Hailey, ID, Erik Sharp, Kennewick, Kris and Scott Jordan, Richland, and Jesse Jordan of Copperas Cove, TX , and six great-grandchildren. He was a devoted husband and father. Mel grew up in Yakima graduating from Davis High School, later graduating with honors at WSU with a degree in Education. At WSU he was on the collegiate swimming and diving team and Captain of the cheerleading squad. He was also in ROTC and later served in the Korean War as a captain in the infantry. He was decorated with a Bronze Star with Valor and a Purple Heart. Mel came to Moses Lake in 1955, teaching at Chief Moses until his retirement in 1981. He taught physical education and was wrestling and football coach. He coached numerous future state and national wrestling champions. He was instrumental in starting the youth wrestling program in the 1950’s, which later underpinned the wrestling dominance of Moses Lake High School. Mel was an icon for Moses Lake High sports. He was known as the “Voice of the Chiefs” for his 50 years of broadcasting Moses Lake Wrestling, Football, and Basketball with his very able assistant Vicki. He was not just a broadcaster. He talked with and knew the individual participants and coaches. His broadcasts were riveting. He was very proud of the Moses Lake community and their sports teams. During his years teaching, coaching, and mentoring, and later in retirement, he touched and gave life lessons to thousands of Moses Lake youth, sometimes across three generations of the same family. Mel participated in many other activities including being a nationally ranked water skier and judge, American Water Ski Association member emeritus, 25 years on the National Ski Patrol, Emergency Medical Technician, Japanese Agricultural Exchange Program, Moses Lake Sports Hall of Fame and board member, Washington State Wrestling Hall of Fame, Inland Empire Hall of Fame, National Wrestling Hall of Fame, and Ranger 20 National Sailing Champion. In his later years, he became an avid bike rider as it allowed him to exercise and be free of restrictions from his war injuries. Private family graveside services were held at Pioneer Memorial Gardens. Kayser's Chapel is handling arrangements. A Celebration of Mel Olson's Life will be held at 2 p.m., Thursday, July 26th at 2 pm at Moses Lake High School, in the Chief Gym.

Robert Mel Olson, 89, passed away July 3, 2018 in Moses Lake, WA. Mel was born on July 22, 1928 in Yakima. He was preceded in death by his Parents, John and Edna, and brother John. He is survived by his spouse of nearly 70 years, Vicki, daughters... View Obituary & Service Information

The family of Robert "Mel" Olson created this Life Tributes page to make it easy to share your memories.