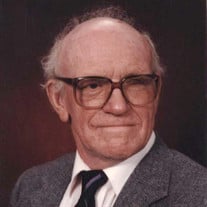 Robert “Bob” W. Peterson, 93, Yuma, Arizona resident and formerly of Royal City, Washington passed away at his home on July 4, 2018. Viewing will be from 9:00 a.m. to 9:45 a.m. on Thursday, July 12, 2018 at St. Michael’s Catholic Church in Royal City. Following the viewing at 10:00 a.m., Holy Rosary will be prayed followed with a Liturgy of the Word. Burial will be in Royal Memorial Gardens. Robert was born in 1925 in Emmett, Idaho to Anders Johan “John” Peterson and Irene A. Brown. His nickname was Red, for his fiery red hair. He joined the US Army Air Corp towards the end of WWII and served as a radio operator instructor. He served until the end of the war. While stationed across the river from St. Louis, Missouri at Scott Field, Illinois, he met Josephine. They fell in love and they married in 1946. Robert and Josephine moved back to Idaho to settle and establish their farm. They had 10 children, moved to Washington State, and pioneered farming on the Royal Slope. After much hard work and his family working at his side, they built a successful farming business. His beloved Josephine passed away too early in 1990. He married Geraldine in 1991. They enjoyed dancing, traveling to all seven continents, and spending time with their children, grandchildren, and great-grandchildren. They eventually moved to Yuma, Arizona. Robert lived a full, adventurous life and was a visionary in many respects. He is preceded in death by his first wife Josephine, his daughter Benita, his son John, his daughter Shirley, and his son Dwight. Also, his sister Ruth, and both his parents. He is survived by his wife Geraldine, his daughters Alice, Roberta, Mary, Vera, Frances “Susie”, and his son Michael. Also, his brother Roger “Pete” and sister Elin“Chris”. A celebration of life will be held in Yuma, Arizona at a later date.

The family of Robert "Bob" Peterson created this Life Tributes page to make it easy to share your memories.