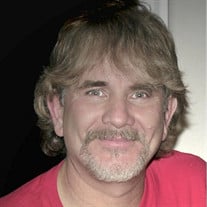 Richard Dewayne Cassiano March 7, 1958 – December, 27, 2017 Richard Dewayne Cassiano was born March 7, 1958 in Moses Lake, Washington to Joseph J. Cassiano Sr. and Marylou Smith. Richard passed away peacefully from ALS at the age of 59 in his home surrounded by his loving family. Richard was one of five children. He was born and raised in Moses Lake and never found a reason to leave. His family was extremely important to him. No matter what he was doing it included his sister and two brothers. He always felt that living in Moses Lake was like being on vacation with so many things to do. Richard had many jobs. In 1978 while working at U & I Sugar plant, he had an accident that left him with limited use of his left arm. The accident never stopped him from enjoying life. Richard last worked for Wal-Mart for over 20 years before retiring due to his ALS disease. No matter where Rick worked the employees enjoyed his great sense of humor and kindness. Richard also enjoyed volunteering for the Mrs. Washington America pageant for many years with his girlfriend Shelley. Although he didn’t follow it till later in his life, his passion was oil and acrylic painting. He enjoyed painting for family and friends. He had his first art show at the Porterhouse restaurant a couple of years ago and was looking forward to another one. He published cartoon comic strips for the BBCC Tumbleweed Times. He really enjoyed outdoor sports; dirt bike riding in the sand dunes with his brothers and sister, riding his quad and boating. Halloween was his favorite non-holiday; he participated in the planning and orchestration of a Haunted House for several years. Rick was a true 12th man for the Seahawks. When the game started he was always decked out with full Seahawks attire; many times even his face and hair painted up flaunting the colors proudly. He had a thing for the newest electronics, when something new came out he was always one of the first to get all the latest electronics. Richard is survived by his longtime girlfriend of 23 years Shelley Vanhooser- the Love of his Life. His mother Marylou Newcomb, daughter Chelsea Roth (Dustin) and two grandchildren Ryder Leroy Roth and Lucianna Marge Roth, sister Pamela Cassiano Curnel (David), two brothers, Joseph J. Cassiano Jr. (Janet) and John Cassiano (Lori). He is also survived by his nieces and nephews Joseph J. Cassiano (Mary), Melissa Curnel Pendleton, Evan Cassiano (Cree), Erin Suarez (Alvin) and many aunts, uncles, and cousins. He is preceded in death by his father Joseph J. Cassiano Sr. and Sister Linda Cassiano. Viewing is at 12:30 to 1:30 pm, Rosary 1:30 -2:00 pm and Mass 2:00. at Our Lady of Fatima Catholic Church on January 2, 2018. Please leave a memory for the family or sign their online guestbook at Kayser’s Chapel of Memories. Arrangements are in care of Kayser's Chapel of Memories.

The family of Richard "Rick" Cassiano created this Life Tributes page to make it easy to share your memories.