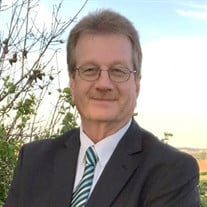 Richard George Bisnett, (60) a long time Warden resident passed away unexpectedly Friday, September 8th while traveling home from Seattle with his eternal companion by his side. Funeral Services will be held Friday September 15th, 2017 at 10:00 a.m. at The Church of Jesus Christ of Latter-day Saints-Warden Chapel with interment to follow at Sunset Memorial Gardens in Warden. A family greeting will take place from 9:00 - 9:45 a.m. at the church on September 15th. Viewing-Gathering: Thursday September 14th, 2017 at Kayser's Chapel of Memories in Moses Lake, WA from 5:00-7:00 p.m. He was born June 11th, 1957 in Canton, New York to Theodore and Ida Bisnett. In 1964, his father headed west to work and settled in Othello, WA. Rich was the youngest of 6 children and loved big families. He would always say, “they saved the best for last.” Rich loved all sports and became friends with many who shared his desire to play. At the age of 16, he was introduced and converted to the Church of Jesus Christ of Latter-day Saints through his friend’s examples. He said time and time again it was the best decision he ever made and expressed to his children the importance to pick good friends. He played many sports and one of his greatest achievements was being named a 1974-75 Prep-All American in Football. On October 21, 1980, he was sealed for time and all eternity in the Idaho Falls Temple to his beautiful wife Lyn (Cox). They were blessed with six children. Rich worked hard to provide in whatever way he could for his family. In 1991, he began working for the City of Moses lake & was the Director of Human Resources. This allowed him time and freedom to invest in his great loves: family, church, sports and others. By 1996 he was holding a microphone, pen, stat-book, and clipboard as the voice of the Warden Cougars. He would often race the team to the locker room to share stats and his observations with coaching staff to help Warden athletes succeed. Rich was always serving others in his many callings and assignments in life; Scouting, Sunday School, Young Men, Elders Quorum, High Priests, Ward & Stake Clerk, and High Council. He loved golfing, gardening, and especially being a grandpa to 8 grandchildren: Aleana, Jack, Viviana, Milly, Whitleigh, Jayleigh, Divya, and Mason. His life of dedication will forever be cherished by all. He is survived by his wife Lyn & children: Abigail (Jason) Hines, Levi (Dania) Bisnett, Joshua (Tylee) Bisnett, Benjamin (Rachael) Bisnett, Emma (Marshall) Goodrich and Hannah Bisnett (Kole Whitby) Fiancé. Siblings: Carol (Al) Henneman, Bill Bisnett, Duane (Katherine) Bisnett, and Beverly (Dell) May. Richard was preceded in death by his parents Theodore and Ida (Reynolds) Bisnett and sister Bonnie Bisnett-Cox, Nephew Donnie Henneman and sister in law Linda Bisnett.

Richard George Bisnett, (60) a long time Warden resident passed away unexpectedly Friday, September 8th while traveling home from Seattle with his eternal companion by his side. Funeral Services will be held Friday September 15th, 2017 at 10:00... View Obituary & Service Information

The family of Richard Bisnett created this Life Tributes page to make it easy to share your memories.