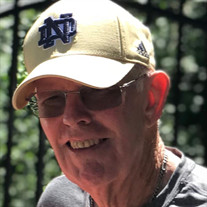 Renaud J. Vaillancourt, born March 30, 1943, to Winnie and Patrick Vaillancourt in Frenchville, Maine passed away October 11, 2021 in Grandview, Wa. During his grade school years, the family moved to Providence, Rhode Island where Renaud (Reno) grew up. He joined the Air Force in Feb of 1963 and ultimately was stationed in Moses Lake, Wa. While there he met and married Ginger Johnson and they had 3 children. In 1989 Reno married Cheryl Levesque. They lived in Moses Lake until 2014 when they retired to Sequim, Wa. Due to Reno's illness, they returned to Eastern Washington. Reno enjoyed daily walks with his dogs, collecting coins and gemstones. He had a profound love of the ocean and thought beaches were for collecting driftwood and bringing it home. He was an avid fan of the NY Yankees, NY Giants, and the Notre Dame Fighting Irish Renaud (Reno) is survived by his wife Cheryl, Wenatchee, daughters Laurie Vaillancourt and Christi Romero, Moses Lake, a stepdaughter Wendy Tankersley, Wenatchee.; Grandchildren Sydney, Jaime, Abby, Payton, Drew, and Chandler, and two great-grandchildren and a sister Pat who resides in Massachusetts. He was preceded in death by his brother Roger, sisters Gladys and Theresa, as well as his son Kevin. A graveside memorial service will be at the Guardian Angels Cemetery on October 30, 2021, at 1:00. In lieu of flowers, donations can be made to "Mikey's Chance Canine Rescue".

The family of Renaud John Vaillancourt created this Life Tributes page to make it easy to share your memories.