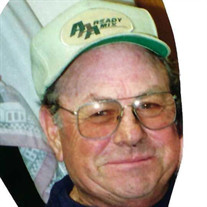 Raymond Edward Gunn, of Moses Lake, passed away peacefully at home on January 5, 2020. Raymond was born in Spur, Texas to Lloyd and Thelma Gunn on September 30, 1934. During his childhood they moved several places. After leaving Texas their travels took them to Arizona, California and Oregon working as laborers in the fields harvesting many varieties of crops. They eventually settled in Sherwood, Oregon. The family called Sherwood home for four years, it was the longest they stayed in one spot. This was due to the gas rationing and Pa couldn’t pack up the family and move about. In March of 1952 Ray joined the Air Force at the age of 17. He spent most of his active duty stationed in Japan during the Korean War. His last year of service was Dover Air Force base in Delaware. He received an honorary discharge March, 1956. New Jersey is where he met Lucy in the winter of 1954 and they later married March 27th, 1955. Spring of 1956 they moved to Moses Lake to farm with his Pa in Block 40. One year of farming and just barely eking out a living, he left the farm and started working for Boeing as an airplane mechanic. After employment with Boeing he owned and operated a Liquor Store combination Shoe store in Othello. He wore many hats as so many of us remember. At a young age he and his whole family always had a love for motorcycles. He first met Robert Knievel at the Moses Lake Honda Store, which was the beginning of a long lasting friendship. Later Knievel and Ray were on the road performing at race tracks in Central Washington promoting Knievel’s jumps, trying to make an extra dollar. No money in that adventure but there were lots of stories. He worked at the old Pay-n-Pak in Moses Lake for approximately three years. During that time Knievel called and asked him to come back and work for him again. At this time he was single and wanted a change, the money sounded good and the two were back together on the road. But like always it was too much of a whirlwind life for a down to earth quiet man and he was ready to move on. He agreed to one more jump “The Snake River”, September 8, 1974. The jump in Twin Falls, Idaho was exciting and spectacular and viewed worldwide but ended with Knievel parachuting to the bottom of the Snake River canyon several thousand feet below. Ray left Knievel and moved back to Moses Lake where his son Raymond Shawn Gunn was born in January, 1975. He started working for Columbia Sand and Gravel/ AAA Ready-Mix, spring of 1975 up until retirement in 2012. He met and married Frances in July of 1991. Motorcycles are what he loved along with many days on the lake waterskiing. He rode for over 72 years and at the age of 83 he retired from riding. He is survived by his son Raymond Shawn Gunn, Step-sons Jeffrey (Carrie) and Shawn (Jill) Robnett, Grandson Gavin Gunn, step grand-daughters Stephanie, Shiann, Samantha, ShaylieAnn, Kayla, Avery and Rachel, Brother Burt (Shirley) Gunn and numerus nieces and nephews. Raymond is preceded in death by his parents Lloyd and Thelma Gunn, Sister Betty Jo Reynolds, Brother Jimmie Dale Gunn Celebration of life to be held at Mulligans at The Pointe at Moses Pointe Golf Course the 27th of June at 2:00 PM.

Raymond Edward Gunn, of Moses Lake, passed away peacefully at home on January 5, 2020. Raymond was born in Spur, Texas to Lloyd and Thelma Gunn on September 30, 1934. During his childhood they moved several places. After leaving Texas their... View Obituary & Service Information

The family of Raymon E Gunn created this Life Tributes page to make it easy to share your memories.

Raymond Edward Gunn, of Moses Lake, passed away peacefully at...