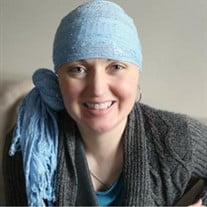 Rachael Olson went home to her Lord on Christmas morning after a prolonged battle with brain cancer. Rachael and her twin brother were born on March 4, 1987, in Reno, Nev., to Kathy (Olson) and Maurice Grigg. The family moved back to Montana in 1989 where she lived and attended school through graduation from Columbia Falls High School in 2005. She was on the cheerleading squad, the student council and a member of the National Honor Society. It was there that she met the love of her life, Craig Olson. They were married July 7, 2007. Together they attended Walla Walla Community College where she received her associate's degree in science. They then attended North Dakota State University and later Central Washington University where Rachael received her bachelor's degree in middle school math and science education in 2012. Craig and Rachael were blessed with two sons; Michael Connor Olson in 2012 and Camdynn Matthew Olson in 2015. Her boys were the light of her life. Despite her illness and a dire prognosis, Rachael never gave up hope. She defied all medical predictions and fought back with her signature quiet grace, strength, and unwavering faith. All those who knew her loved her and admired her tenacity. Michael says, "I love Mama's hugs most." Rachael is survived by her devoted husband Craig Olson and their two sons, Michael and Camdynn; her beloved mother Kathy Rolfs and stepfather Allen Rolfs, her twin brother Raymond Grigg (Cayla); her older sister Miriah Sachs (Ben); two step-brothers Gavin (Melissa) and Alex (Amanda) Rolfs; grandparents Jim and Deloris Matson, JoWana Olson, and Melvin and Carol Grigg. She will also be greatly missed by her nieces and nephews Hayden, Nicholas, Aubrey, London, Megan, Braydon, Michael, Ava, Miranda, Brynlee, Easton, Camryn, Caplin, Addison, Carson and Mason as well as numerous aunts, uncles and cousins. She also leaves behind her beloved in-laws Jim and Mary Olson, Adam and Hana Olson, Aly and John Ronan, as well as countless friends, church family and her cherished cat Fatty. She is preceded in death by her paternal grandmother Patricia (Patsy) Grigg, maternal grandfather Gerald Olson and cousin Erik Matson. Rachael was a dedicated advocate for others, attending and fundraising for cancer research each year at the Seattle Brain Cancer Walk. In lieu of flowers please consider making a donation in her honor to www.braincancerwalk.org by selecting her team Rachael's Angels. Donations may also be made to Moses Lake Christian Church - a congregation which has supported her family through this time. Services to be held at Moses Lake Christian Church, Dec. 30 at 1 pm. Jeremiah 29:11 For I know the plans I have for you, says the Lord, plans for welfare and not for evil, to give you a future and a hope.

Rachael Olson went home to her Lord on Christmas morning after a prolonged battle with brain cancer. Rachael and her twin brother were born on March 4, 1987, in Reno, Nev., to Kathy (Olson) and Maurice Grigg. The family moved back to Montana... View Obituary & Service Information

The family of Rachael I Olson created this Life Tributes page to make it easy to share your memories.

Rachael Olson went home to her Lord on Christmas morning after...