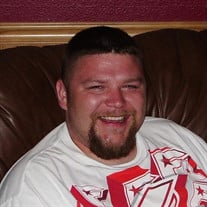 Quintin Louis Justice, 35, of Moses Lake, passed away October 24, 2019 at Central Washington Hospital in Wenatchee WA due to ongoing medical issues he had endured during the last six months. Quintin was born to DuWayne and Rita Justice on April 29, 1984 in Moses Lake WA. He was the younger brother to his sister, Jolene. As a child growing up most people will remember Quintin as the neighbor kid, with a dirty face, running the neighborhood with his childhood buddies on power wheels, bikes, or driving the riding lawn mower down to the little store, or in the gravel pit (after being told not to, of course). Did you know a riding lawn mower could navigate through wet cement and gravel hills? Well, they can, Quintin could have attested to that! Quintin attended school in the Moses Lake School District and was a graduate of Moses Lake High School Class of 2002. He graduated from Big Bend Community College in 2004 from their 2-year Automotive Program. Quintin spent most of his adult years working at Genie where he made many wonderful friends. If he was not working, he enjoyed spending his free time at Blue Lake with his Soap Lake Rod and Gun Club friends, shooting his guns, or vacationing on the Oregon Coast with his sister and her family. He enjoyed holiday traditions with family, his favorite being- Christmas Eve Uno games, presents, his Aunt Debbie’s famous wraps and musical entertainment, and 24 hours of a Christmas Story movie. Quintin was loving, kind and funny! Often, he would have everyone laughing with his sarcastic remarks, or hilarious impersonations. He will be missed tremendously. Quintin is survived by his mother Rita Carson, his sister Jolene Justice (Angel), his nieces Jacelynn and Dominque and nephew Angel all of Moses Lake. His Aunt Cindy Nelson (Hal) of Spokane WA; his Aunt Debbie Baulne (Leo) of Moses Lake; and his cousins Jennifer (Ben and Jade) of Bonners Ferry ID and Nick of Portland OR. Also, his Aunt Virginia Almont of North Bend WA; Uncle David Bunkelman of Kent WA; Uncle Al Bunkelman of Seattle WA; Aunt Christine Papineau (Dan) of Ellensburg WA; Aunt Eileen Thompson of Rathdrum ID; Uncle Armin Bunkelman (Karla) of Idaho; Aunt Bellinda Oosterwyk (Rick) of Arlington WA; and a whole lot of cousins as well. And finally, his beloved Boxer, Jaxx. He is preceded in death by his father DuWayne Justice, his grandparents Ferdinand and Phyllis Justice and Armin and Jo Bunkleman, and Uncle Lenard Bunkelman. The family would also like to thank the doctors, nurses and staff at Samaritan Hospital, and Central WA Hospital for their tender loving care of Quintin and his family during his stays. Arrangements have been entrusted to the care of Kayser’s Chapel of Memories in Moses Lake. A Memorial Service is scheduled for December 7, 2019 at 1:00 pm at Kayser’s Chapel of Memories in Moses Lake, WA.

Quintin Louis Justice, 35, of Moses Lake, passed away October 24, 2019 at Central Washington Hospital in Wenatchee WA due to ongoing medical issues he had endured during the last six months. Quintin was born to DuWayne and Rita Justice on April... View Obituary & Service Information

The family of Quintin Louis Justice created this Life Tributes page to make it easy to share your memories.