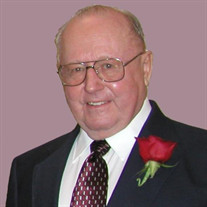 Philip William Hermann, Sr., 91, passed away on Sunday, August 15, 2021, in Moses Lake, WA. Mass of Christian Burial will be said at 10am on Wednesday, August 25th at Our Lady of Fatima Catholic Church in Moses Lake. Father Daniel G. Dufner will be officiating. Interment to follow at Guarding Angels Cemetery in Moses Lake. Phil was born on November 7, 1929, to Walter and Elizabeth Hermann in Milton-Freewater, OR. He lived on the family orchard in Milton-Freewater, graduating from Eastside Elementary School in 1944 and St. Patrick’s High School in Walla Walla, WA in 1948. He attended St. Edwards Seminary in Kenmore, WA from 1948 to 1952. Phil served in the United States Air Force (USAF) from 1952 to 1956. He married Geneva O’Connell in 1954 in Thermopolis, WY. They then lived in Albuquerque, NM and Rapid City, SD while in the USAF then Milton-Freewater and Pendleton, OR before moving to Moses Lake in 1958. Phil worked for Standard Stations, Inc. for eleven years and then owned and operated Phil’s Chevron from 1969 through 1981. Phil worked for the City of Moses Lake in the Park and Recreation Department from 1981 until his retirement in 1994. Phil worked as a part-time drive for People to People Transportation from 1994 to 2004. Phil was a long-time member of Our Lady of Fatima Catholic Church. Phil was preceded in death by his wife (Geneva), father (Walter), mother (Elizabeth), siblings and their spouses – Mary and Dick Helling, Richard and Rita Hermann, Robert Kennedy, and W. Peter and Lenora Hermann. Phil is survived by his children, spouses, and grandchildren, Mary and Riley Yerxa (Amy, Brian, Kyle, and Eric), John Hermann (Jennifer and Sarah), Joe and Viet Hermann (Michael), Jeanne and Michael Petrin (Christine and Lauren), Philip William Hermann, Jr. (Philip, Rob, Mike, and Tia), David and Annmarie Hermann (Elizabeth and Joseph), and Eileen and Brian Snyder (Rebecca and Zachary). Phil was also blessed with 18 great grandchildren, 3 great-great grandchildren, and numerous nieces and nephews. Memorials may be made to Crossroads Resource Center (https://www.pregnancywa.com/ 509-765-4425)

The family of Philip William Hermann Sr created this Life Tributes page to make it easy to share your memories.