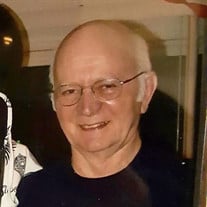 Peter “Pete” Melvin Harder, went to be with the Lord, Sunday, October 16, 2016 at his home in Moses Lake after a long illness. Pete was 82 years old. Pete was a good husband and father, and devoted to the Lord Jesus. Pete is survived by his wife, Marilee Harder at the family home, three children, Peter Harder Jr. (Nan) of Spokane, Paul Harder (Ann) of Moses Lake and Phillip Harder (Chris) of Ephrata, five grandchildren and 6 great grandchildren. Pete was a long time member of First Baptist Church, Moses Lake. Pete was an active member, serving as AwanaSparks director, Sunday School teacher, deacon and member of the choir. Pete was owner of Warden True Value hardware store with his wife, purchasing the store in 1987 until retiring in 2004. Before that he co-owned the Moses Lake Coast to Coast hardware store and was well-known for decades for his building and repair expertise. After graduating from Oak Hills Bible College in Minnesota, Pete heard that the Columbia Basin was booming with the introduction of water. He arrived in Moses Lake with a little money and a 1946 Ford and began working as a farm hand andattending First Baptist Church. He was soon taken, by an attractive young woman, Marilee Edwards and the relationship blossomed until they were married in 1956. After serving in the Army from 1956 to1958 he and his growing family returned to Moses Lake and began working in the family hardware business. Pete enjoyed cars, and had the distinction of building a kit car. Since he didn't have a garage and with the patience of his family, he built the car in the only space large enough—the home’s family room. Once built, he took out the large picture window and with the help of his sons and friends lifted the car to the outdoors. Pete enjoyed target shooting with his sons. They would often head out to the sand dunes on a Sunday afternoon after church. Pete was born October 21, 1933 in Lostwood, North Dakota, but grew up in Warroad, Minnesota, He was born to Peter S. and Mary Q Harder, the oldest of six brothers, and learned the value of hard work as a youngster on the family farm. Pete and his family enjoyed visits to his brothers and parents. Over the years visiting his brothers became difficult as they all were called to foreign mission fields, the youngest to Mexico and the other four to various areas in Brazil. Pete's brothers recently gathered in Moses Lake for a joyous visit with their older sibling. A memorial service will be held to honor Pete on Saturday, October 29 at 1:00pm at First Baptist Church. In lieu of flowers, the family request that donations be made to Serve Moses Lake. Please sign the online guestbook or leave a note for the family at www.kayserschapel.com Arrangements are in care of Kayser's Chapel & Crematory.

Peter &#8220;Pete&#8221; Melvin Harder, went to be with the Lord, Sunday, October 16, 2016 at his home in Moses Lake after a long illness. Pete was 82 years old. Pete was a good husband and father, and devoted to the Lord Jesus. Pete is survived... View Obituary & Service Information

The family of Peter Harder created this Life Tributes page to make it easy to share your memories.

Peter “Pete” Melvin Harder, went to be with the Lord, Sunday,...