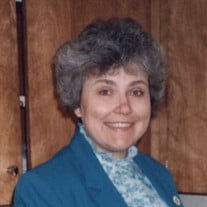 Peggy Louise Grigg, 81 longtime Moses Lake resident passed away Saturday, January 5th, 2019 at Lakeview Home Care in Moses Lake. Funeral services will be held at 10:00 a.m. at the Church of Jesus Christ of Latter Day Saints Rose Street Chapel. Burial will follow at Guarding Angels Cemetery in Moses Lake. The family will greet friends at the church on Friday morning from 9am until 9:45am. Arrangements are in care of Kayser’s Chapel of Memories. Please sign the online guestbook at www.kayserschapel.com Arrangements in care of Kayser's Chapel. Peggy was born September 1, 1937 in Weiser, Idaho to the late Jessie Wayne Steele and Louise Aldred Steele. At the age of 3 months she moved with her family to Nampa, Idaho. While there, Peggy’s sister Dorothy was born. After a few years passed, the family moved to Hereford, Texas and 6 months later to Plainview, Texas. Times were tough following the breakup of her parents where she and her mother and sister returned to Weiser, Idaho where Peggy’s grandparents lived. While there, brother Leon was born. Her mother then met and married Kenneth Grout. In 1951 Peggy and her family moved to Hermiston, Oregon following the birth of brother Richard. Two years later, Peggy and the family once again moved and this time landed in Vale, Oregon. In 1954 her youngest brother Stephen made his arrival. The next year, Peggy graduated from High School and moved to Salt Lake City, Utah where she furthered her education and worked in the insurance industry. 1958 was a big year for Peggy when in June she and her family were sealed for time and all eternity in the Salt Lake Temple. In September of that same year Peggy married and was sealed to her eternal companion, Samuel Parley Grigg and they moved to Provo, Utah where Sam attended classes at Brigham Young University. In 1959 the couple moved to Harper Oregon where Sam continued the longtime Grigg heritage as a beekeeper. Son Spencer made his arrival in August of that same year. The little family relocated to Bountiful, Utah and about a year later bought a home in Murray, Utah. _While there, in 1961, twin sons Scott and Shaun joined the family. In 1962 the family moved to Boise, Idaho and then on to Idaho Falls and eventually back to the Boise area. Son Stuart was born in 1965. In 1967 Sam and Peggy moved to Moses Lake, Washington where Sam continued in beekeeping. Youngest son Stacey completed the family with his arrival in 1970. Peggy worked for the Board of Grant County Commissioners until her retirement some years ago. Peggy was an active member of the Church of Jesus Christ of Latter Day Saints where she held various leadership positions mostly working with the women and youth of the Moses Lake 1st Ward. Peggy and Sam also worked as temple workers at the Columbia River Temple. Peggy is survived by her 5 sons and their wives, Spencer & Ruth, Scott & Kelly, Shaun & Tammy, Stuart & Jennifer and Stacey & LaNae; her sister Dorothy Whitehead; brother Leon Steele; brother Richard Grout; brother Stephen Grout; 15 grandchildren and 9 great-grandchildren, and numerous nieces, nephews and extended family. Besides her parents, Peggy was preceded in death by Sam in 2015.

The family of Peggy L Grigg created this Life Tributes page to make it easy to share your memories.