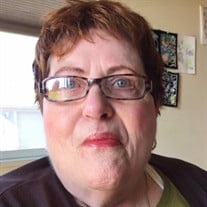 Paulette Jean Dyer September 29, 1946- September 27, 2021 Paulette passed away on September 27, 2021 at Valley Road Residential care in Moses Lake, WA. She was 74 Years old. Paulette was born on September 29, 1946 in Portland, OR to Paul and Gladys Muzzy. She Graduated in 1965 from Wheeler High School in Fossil, OR. In November of 1963, she married Jack Bailey. They welcomed their daughter on May 16, 1964. They later divorced in 1966. She then married Terry Peterson on February 18, 1968. They were married for 5 years before divorcing in 1973. Her final marriage was to Clerance Dyer (Bob) in July 1979 in Reno Nevada. They were married for 26 years, until his death, in March of 2006, at the age of 91. Paulette then moved to Moses Lake to be near her daughter and son-in-law. She was active at the Emmanuel Baptist Church in Moses Lake, until she could no longer physically attend. Her personality was bigger than life. She always had a funny saying to go along with the situation at the time. She loved playing cards with family and friends. She was also known as the “Friendly neighborhood watch”. Paulette will be dearly missed by her family and friends. She is survived by her daughter, Cheryl Kingrey (jerry) of Moses lake; granddaughter Candice Burke (Rayn) of Olympia, WA; Great-grandchildren Russell and Mikaela Webb; Sister in Law donna Muzzy (Ron), of Hillsboro, OR; nephews Mark Muzzy (Kit) of Portland, OR and Kevin Muzzy (Denice) of Hayden, ID; Nieces Ronda Evens (Tom) of Hillsboro, OR and Paula Kraal (David) of Murrieta, CA. She was proceeded in death by her parents Paul and Gladys Muzzy and her brothers Lyle Muzzy (Elva) and Ron Muzzy (Donna). Graveside services are to be held on Saturday, October 9th, 2021 at 2pm at the Guarding Angels Cemetery, in Moses Lake, WA with Pastor Walter Klockers of Immanuel Lutheran Church officiating.

The family of Paulette Jean Dyer created this Life Tributes page to make it easy to share your memories.