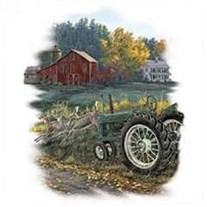 Paul S. Terwilleger was born March 31, 1931 to Chester Earl Terwilleger and Arminda Virginia Schott Terwilleger in Mena, Arkansas. Paul was the eldest of the three children which included Kathryn and Chester Earl Jr. better known as "Jack." They moved from Arkansas to Oklahoma and eventually Washington as Earl was an electrician by trade. They first moved to Kennewick while Earl worked as an electrician during the construction of Hanford. Earl having grown up the son of a blacksmith, wagon maker and farmer wanted to return to farm work. The family moved to Warden in 1947 to return to farming on their property along the Lind Coulee. Paul on the day he received his driver's license, drove the moving truck from Kennewick to Warden as his first drive. He attended Moses Lake High School due to his love of sports. He played Basketball, Football and Baseball. He was unable to graduate high school due to a football knee injury. At 26, and while working as a Warden Police Officer, Paul returned to achool attending Warden High School and graduated. He then played Football at Eastern Washington University for a short period of time. He, along with his father Earl, helped in the construction of the Grand Coulee Dam. Paul along with his family continued to farm with a focus on wheat, alfalfa, alfalfa seed, bees and cattle. In 1976, Paul married Sharren in which he gained two children, Danette and Tony Aukerman. In 1978, Arminda Paulette was born. Paul was an avid sports fan and was often found supporting Warden High games no matter the sport or season. Paul was also an exceptional story teller in which his nieces and nephews would patiently and quietly gather around to hear. Paul is survived by his children Danette (Ray) Valdez, Tony "Buck" (Laura) Aukerman, Arminda "Myndi" (Scott) Terwilleger Svoboda; his grandchildren Daylann, Razier and Ahlanna; his nephews Darrell (Cheryl) Berreth and Shawn Berreth and his great nephew's Clinton, Brandon; great niece Kelsey (Patrick), great great niece Kaylee, great niece Cody and many life long friends in Grant County. Paul was a long standing member of the First Baptist Church of Warden. A celebration of life will be held at the First Baptist Church in Warden on September 22nd at 2pm. Paul loved the community of Warden having resided there for 71 years; in lieu of flowers, please bring a story to share at this celebration or make a donation to the Warden Fire Department.

The family of Paul Terwilleger created this Life Tributes page to make it easy to share your memories.