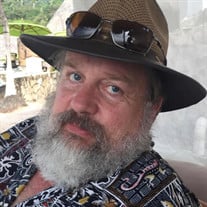 Paul Edward Anderson, age 58, returned to his Father in Heaven on May 21,2022. He leaves behind his wife of 34 years, Viki Anderson of Moses Lake, daughter Josslin Bowman (Paul) of Moses Lake, a granddaughter Luciana Bowman, sons Dylan (Telisha), Nikita, and Adam all of Moses Lake. He is also survived by his sisters Susan (Gary) Kildow of Caldwell Idaho, Karen (Robert) Nelson of SeaTac Washington, and Bonnie (Doug) Baker of Wasilla Alaska, and a brother Jimmy (Kelly) of Sequim, WA, as well as his sister in law Beth (John). He was preceded in death by his parents Larry and Joyce Anderson, and a brother, John. Paul was born July 16, 1963 In Idaho Falls, ID to Larry Clifton Anderson and Norma Joyce Corbridge. He was the fifth of six children. Because of his father’s employment the family moved frequently, living in Idaho Falls, Rigby, and Boise, ID, Longview WA, Portland OR, finally settling in Moses Lake in 1976 when Paul was 13. He always said he loved living in Boise where he played many sports and had a large circle of friends. After moving to the Columbia Basin, they settled on several acres of land where Paul spent hours perfecting his aim while decreasing the rockchuck population. After moving into town, he met Viki, whom he would later marry. Paul was very intelligent and did well in school when he wanted to. He dropped out his senior year, obtaining his GED with very high scores, and joined the US Navy. He was stationed in San Diego CA aboard the USS Albert David- a submarine hunting frigate. He was excellent at his job and loved being at sea. After a few years, he and the Navy had a parting of ways and Paul returned to Moses Lake. When he came home, he made changes in his life, and prepared to serve a mission for his church- The Church of Jesus Christ of Latter-Day Saints. He was called to serve in the Brasil Brasilia Mission and served faithfully for two years. He returned to Moses Lake on Thanksgiving Day 1987, saw Viki the next day, and they were married in the Seattle Temple 6 weeks later. Paul and Viki welcomed Josslin in April 1989, then in June moved to Pullman where he enrolled in WSU, pursuing a pharmacy degree. In 1990, they moved to Spokane WA, and he commuted to Pullman to school while Viki worked at Sacred Heart Medical Center. In February of 1992 Dylan joined the family. After graduating in 1994 with a bachelor's degree in pharmacy, he accepted a job offer in Quincy WA and the family returned to the Columbia Basin. He used to joke that the Basin sucked people in and you could never really leave. In February of 1995 Adam joined them, and they lived in Quincy, raising the children. In 2001 Paul and Viki took the opportunity to adopt a child from Russia, and in 2002 Nikita came to complete the family. In 2003 Paul brought the family to Moses Lake, settling out in the country on a few acres where he enjoyed raising pigs with the boys for 4H projects, and developing the property. He loved to cook, and was very gifted. People always jumped at the opportunity when he would extend an invitation to dinner because they knew they were in for a treat. He enjoyed firearms; shooting them, reloading ammunition, and building custom rifles that he and the family loved to target shoot. He adored his children and loved spending time with them, talking for hours. He was absolutely smitten with his grand daughter, Luci, and was thrilled when she would let him play with her. Paul loved this country. He was very patriotic and loved liberty. He deeply believed in the agency of men to do as their conscience dictated. He was loving and inclusive of everyone, loving them where they were in their lives, regardless of their choices. He would always refuse to pick up his end of the stick when someone offended him, and would frequently encourage his family to “just let it go, it’s not important in the big picture. Let it go.” Although he didn’t smile often, when he did it lit up the room. Paul was funny and kind, but was very quiet and reserved unless he knew you well. Nicknamed “Mr Sunshine”, his light will be deeply missed.

The family of Paul Edward Anderson created this Life Tributes page to make it easy to share your memories.

Paul Edward Anderson, age 58, returned to his Father in Heaven...