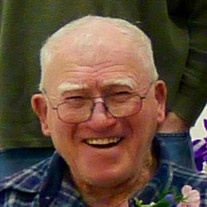 Patrick Karl Lee was a man of two centuries. He was born, at home, in Cummings, KS to John and Marie Lee on May 29, 1933 and passed on June 9, 2020, at home, in Royal City, WA. He was the eldest of 10 children: John, Rose, Joe, Jim, Ann, Tim, Bernie, Mary Therese and Tom. From grades 1-3, he walked a mile to the one-room school, Locust Grove. In 1943, he drove his siblings in the family “school bus,” a 1925 Model A Ford, to the Catholic School, Corpus Christi. He was only about 11 years old and could barely see over the steering wheel! Driver’s-Ed was “On the Job Training” from his father, where he not only learned to drive the Model A and WK tractor, but mostly managed the team of horses to cultivate corn, mow hay, and run the binder to harvest oats. In 1947, he was a freshman at the Atchison County Community High School in Effingham, KS, about 17 miles from his home. Pat rode his pony, Babe, to catch the bus. He played football and ran track. Pat was an elected FFA officer and especially enjoyed raising Duroc hogs. He was awarded the Degree of State Farmer at the 28th State Convention of Future Farmers of America. Following graduation from ACCHS in 1951, Pat worked at the LFM Foundry and on the family farm. On January 25, 1955, Pat was drafted into the US Army and stationed at Fort Lewis, WA. He served 2 years of active duty and was awarded the good Conduct Medal for his service. He transferred into the Army Reserve and served from January 25, 1957 to June 14, 1960. Pat finished out his 8 year service obligation in the US Air Force Reserve where he was an Aircraft Maintenance Helper and was Honorably Discharged June 14, 1963. Pat used his GI Bill to further his education at Kansas State College of Agriculture and Applied Science. He pursued a degree in Mechanical Engineering from 1957 to 1958 while working on the railroad as a Switchman. Pat’s military service made him eligible for the Bureau of Reclamation GI Land Draw. His options were to settle the Green River Project in Wyoming (which had high elevation and a short growing season), the Gila River Project in Arizona, or the Columbia Basin Irrigation Project. He drew Block 82 unit 20 on the Royal Slope. Pat married Dorothy Servaes on April 8, 1961, honeymooned to Royal City in their 1954 International and never left. “He was a tough worker and he had to be. Like the old-timers, he had a hard life and started from scratch breaking the dusty arid ground in 1961 to grow crops with Columbia River irrigation water. Through heat, snow, rain, mud, he just went right on. Like my grandfather, give Pat a piece of baling wire and he'd get the job done,” said Delores Servaes. Pat farmed growing row crops and raising livestock. He also worked in the lab at the U&I Sugar Beet Plant in Moses Lake and later with Lamb-Weston where he retired in 1995. Pat and Dorothy had 10 kids in 14 years: Rosie, Katie, Pam, John, Hank, Pat, Daryl, David, Brandon and Todd. Their children grew up to fulfill his dreams, becoming farmers, entrepreneurs, pilots, engineers, parents, and overall hard workers. He had a fierce pride in his kids. As a grandpa, he always gave great big hugs and had something delicious growing, drying, or ready to can. You couldn’t leave Grandpa’s house without your arms full. Pat loved his country. He was proud to serve and did so for 17 years as an active volunteer at the Royal City Food Bank. Pat and Dorothy were well-known in the community and were the Royal City Grand Marshalls for Summerfest 2017. Pat also loved and served in his church. He was a Pastoral Council Member at St. Michael’s Parish and taught religious education class for many years. Throughout Pat’s life he retained a sense of curiosity. One of his most recent projects was to devise larger wheels for his walker! He loved being outside in his straw hat and overalls, with a toothpick. Big Man, you will be missed! Every time we see a bee, eat a strawberry, or drink sweet tea, we will be thinking of you! Patrick Karl Lee is preceded in death by brothers Arnold Joseph Lee and Richard John Lee, and granddaughter Krystal Rose Dockins. He is survived by his wife Dorothy Lucille Lee. His brothers: James Howard Lee, Thomas Aloysius Lee, Timothy Daniel Lee. His sisters: Ann Katherine Lee, Bernadette Clare Dann, Mary Therese Lee, and Rose Marie Lee. His daughters: Rita Rose Dockins, Mary Catherine Beaumont, Pamela Jane Ott. His sons: John Anthony Lee, Henry Carl Lee, Patrick James Lee, Daryl Antone Lee, David Andrew Lee, Brandon Wayne Lee, Benedict Todd Lee. And their 23 grandchildren. Please join us for the following services: Viewing: Friday, June 19, 2020 from 12:00pm- 4:00pm at Kayser’s Chapel: 831 S Pioneer Way, Moses Lake, WA. (Covid19 regulations will be followed) Funeral Service: Saturday, June 20, 2020 at 11:00am at the Royal Memorial Gardens: 900 Apple Ave Royal City, WA. Per Washington state guidelines 6 foot social distancing is requested.

The family of Patrick Karl Lee created this Life Tributes page to make it easy to share your memories.

Patrick Karl Lee was a man of two centuries. He was born, at...