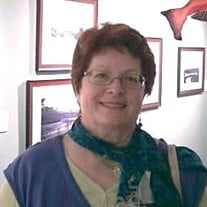 Frances "Patricia" Graham Munson passed away Wednesday, December 5, in Moses Lake, Washington, at the age of 78. “Pat” was born in Anchorage, in the Territory of Alaska, on December 25, 1939, to Neil and Frances Graham. Her parents were true to their generation: self-reliant, hard working and adventurous. Soon after the attack on Pearl Harbor, they boarded a ship for “the states”, dodging mines along the way, and Pat earned her reputation for not having a lick of sea-sickness. In 1946, the family moved from Seattle to Moses Lake, where they founded Basin Electric (and later Fran's Aquarium), and raised Pat and her younger brothers, Fred and David. The Grahams came to know many friends in this town, and they were blessed by frequent visits from their extended families, never losing that sense of adventure, nor the hard work. Pat attended Central Washington College of Education (now Central Washington University), where she studied education, made lifelong friends living at Sue Lombard Hall (the "Sue Gals,"), and found a love for painting studying under Walter Hook, and gaining first-hand exposure to modern techniques by later renowned painter Chuck Close. Her primary medium became water colors, and throughout her adult life she would return to this practice and develop her own warm style. She also met her future husband, Paul Robert Munson of Klamath Falls, Oregon, in the campus Lutheran church. They married on December 20, 1959, at Immanuel Lutheran Church in Moses Lake, where her parents were founding members. While studying in Ellensburg, Pat and Paul had two daughters, Diane Lynn and Tracey Ann. They moved to Kirksville, Missouri, where Paul attended the School of Osteopathic Medicine. There they had a son, Brent Neil. In those years, the adventure included cross-country travels between Kirksville and Moses Lake, and the challenges of raising three children with little money and a small one-bedroom home. Paul did his residency at Eastmoreland Hospital in Portland, Oregon, where they had another daughter, Tana Denise. The family settled in Monmouth, Oregon, where Paul co-founded the Monmouth Clinic and would practice family medicine for four decades. Another son was added to the family, Travis Curt, and the children grew to young adults in this small college town. In 1977, Pat welcomed Eugenia "Sheny" (Guerra Morales) Milla, an exchange student from Guatemala, to become part of the family for a year, staying connected over the years. Pat raised her family with love, and with lots of activities including arts and crafts, and a wide variety of pets. Pat made sure the family frequently visited grandparents in Yakima and Moses Lake, such that these bonds became very special. As the children got older, Pat worked part-time, including practicing real estate. She continued to enjoy her art, as well as other crafts. After returning to live in Moses Lake in 1996, she began working at the Moses Lake Museum and Art Center gift shop, where she enjoyed facilitating arts and crafts classes for children and adults. She was an enthusiastic member of the Columbia Basin Allied Arts and the Desert Artists groups. Following in her mother's footsteps, she was also an active member of the Sons of Norway. Pat had life-long friends, she truly enjoyed getting to know new people, and she was generous. Pat was the primary caregiver for her parents in their last years, inspiring us all with the devotion and love she showed them. After Pat was diagnosed with Parkinson’s Disease (later confirmed as Multiple System Atrophy), her son Brent was there to support her and help adjust as her health declined. She showed so much grace, and continued to share much enjoyment and love with family and friends. She is survived by 1 brother, 5 children, 6 grandchildren, 1 bun in the oven, and a large extended family and group of friends and community that will miss her deeply. A service will be held on Saturday, December 29 at 11:00am at Immanuel Lutheran Church in Moses Lake, with a luncheon following the service. Pat will be buried alongside her parents' resting place, in the Fir Crest Cemetery just south of Monmouth, Oregon.

Frances "Patricia" Graham Munson passed away Wednesday, December 5, in Moses Lake, Washington, at the age of 78. &#8220;Pat&#8221; was born in Anchorage, in the Territory of Alaska, on December 25, 1939, to Neil and Frances Graham. Her parents... View Obituary & Service Information

The family of Patricia Munson created this Life Tributes page to make it easy to share your memories.